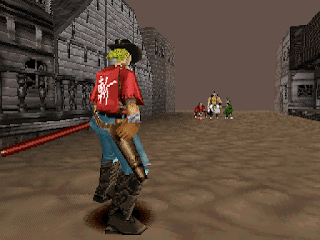 Genre: Action
Perspective: 1st-person, Behind view
Setting: Western
Published by: Agetec
Developed by: UEP Systems Inc.
Released: 1999
Platform: PlayStation (PSX, PS1)
Cowboys and samurai very often become heroes of action films and also computer and video games. Some quickly and without hesitation pull the triggers of their "colts", others wield their sharpened swords even faster - tough guys, you won't say anything. That's just together in one movie or game, fate brings them together infrequently - between America and Japan lies a very vast Pacific Ocean. There was a movie in which a samurai walked around the Wild West, I remember Alain Delon playing a bandit who stole the sword that the Japanese ambassadors were carrying to the American president. But there were no games in which the hero would wield both a samurai sword and a cowboy revolver at the same time (after Capcom borrowed this idea from Devil May Cry). Rising Zan: The Samurai Gunman is the first such game on the PlayStation.
Her hero, a native of the Wild West named Johnny, having learned to shoot accurately, decided to master the wisdom of the "way of the sword", to become a real samurai, and in the end he succeeded in this field, not typical for a cowboy, becoming a man "with the heart of a cowboy and the soul of a samurai." The plot of the game, it should be noted, is sucked from the finger - the developers' attempts to explain where the ninjas and samurai came from in the Wild West are somehow not very convincing. But not in the plot, the main advantage of the game - except for a three-dimensional arcade game in which you have to shoot and chop enemies with a sword every second, the plot is a deeply secondary thing. Well, the game itself comes down to a simple principle - Kill 'em All. And for fans of this kind of games, it will undoubtedly be a pleasant surprise.
‹
›
Home
View web version