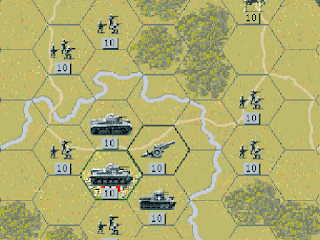 Genre: Strategy / tactics
Perspective: Top-down
Pacing: Turn-based
Gameplay: Turn-based strategy, Wargame
Interface: Point and select
Setting: Africa, Europe, Historical events, Middle East, World War II
Narrative: War
Published by: Strategic Simulations
Developed by: Strategic Simulations
Released: 1996
Platforms: PlayStation (PSX, PS1), 3DO Interactive Multiplayer, DOS
On September 1, 1939, the German war machine introduced the world to modern, industrialized methods of warfare. Her strategy of strictly linking the actions of ground and air forces allowed her to come too close to world domination. For fans of global strategy game Panzer General offers amazing opportunities for conquest based on the scenario of the Second World War. Moreover, you yourself can change this scenario, both in one direction and in the other. For example, after defeating the USSR (supposedly), the troops of Nazi Germany led by you land in the USA or London, and the war continues under this new scenario. On the other hand, you can choose allied troops or other participants and smash the German war machine at the very beginning of the war.
In Panzer General you can play against the computer by taking turns with it. At the same time, all your troops, consisting of several hundred branches, simultaneously occupy new positions. Simple control (well, let's say it's not very simple - volgame) and graphical visibility make the game accessible even for beginners (to be honest, beginners in this game have nothing to do because their head will simply swell from the abundance of options and settings - volgame) strategic games. There is also a wonderful opportunity to play together, which can bring special pleasure.
The advantages of the Panzer General are manifested in a realistic model of warfare. Dynamic clips between levels of the game and the action expected in the frame allow you to get episodes that follow each other. Although no strategy game of this caliber can immediately turn into a fatal passion for the player (except for the big fans of this genre), it is possible to carefully study the first, very exciting scenario.
In general, the game has dozens of scenarios covering the period from 1939 to 1945. You can play them individually or lead a large company where each big win allows you to move on to the next scenario.
With the help of the won premium points, you can upgrade your weapons or purchase new ones. More than 350 types of it reflect the breathtaking advances made during the Second World War in the field of military technology: from the Polish cavalry to the ME262a jet fighter. Moreover, you can command all the forces of the theater of war - aircraft, motorized forces, infantry and even, if necessary, naval forces - in a carefully thought-out strategy, large enough forces are involved.
Undoubtedly, this is a classic game. The depth of the playing field and the richness of details can unexpectedly captivate even non-strategy fans. If you have a lot of free time, then this game will kill it without a trace. This is especially true for large scenarios with dozens or hundreds of combat units that need to be properly positioned, refueled, and then managed.