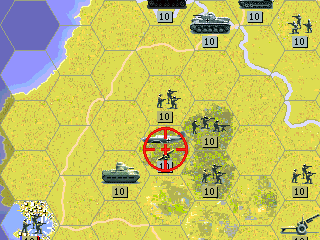 Genre: Strategy / Tactics
Perspective: Top-down
Pacing: Turn-based
Gameplay: Wargame
Interface: Point and Select
Setting: Historical Events, World War II
Narrative: War
Published by: Strategic Simulations
Developed by: Strategic Simulations
Released: 1995
Platforms: 3DO Interactive Multiplayer, DOS, PlayStation (PSX, PS1)
Panzer General is a step-by-step hexagonal military strategy for the second world war for 3DO Interactive Multiplayer, allowing you to side with the Germans (Fascists). You have the opportunity to change the course of history, everything will depend on your actions, on the ability to make decisions and dispose of resources.
Instruction on military actions
Each campaign is allocated a certain time. Do not keep within it - and the enemy will receive reinforcements. At the beginning of the war in general, any defeat leads to the fall of the Third Reich. Each campaign consists of several tours (days). In the first part of the tour you attack, the second part of the tour is the opponent's retaliatory move. To go to the second part of the tour in the main menu, move the cursor to the "End" and press B. On the "End turn" answer: "Yes".
To play one of the scenarios, select the icon with the letter "S". In this mode, you can play together. Options in the upper left corner allow you to set the difficulty level.
Selecting the pictogram "C", you enter the war. It is necessary to indicate the start date, and for 1941 and 1943 you can choose the front: west (W) or east (E) and the level of complexity (SET).
The essence of all operations is in the defense or capture of key enemy cities. Flags show the affiliation of cities. White ovals of the city, controlled by Germany, green - allies. Before you make a move, carefully inspect the map. Pay attention to the obstacles: rivers, mountains, forests and swamps.
With long transitions, to save time, you should stick to the road. To cross the river, it is better to find a bridge. If possible, do not place troops on the cages next to the river or bridge: here they are most vulnerable. Try to protect your troops from attacks by enemy bombers by fighters and anti-aircraft guns.
Keep track of all the technical innovations. Try to constantly update the equipment of your troops. And, of course, without fuel and ammunition, you will not succeed. To refuel or charge ground-based equipment, troops must first be withdrawn from the front line. Aircraft are refueled at the airfield and adjacent cells.
For the victory the squad receives points on the scale of experience. By typing more than a hundred points, you increase the power of the unit by one (the golden star lights up).
Cities and fortresses should not be stormed by tanks. First, conduct a massive attack with several batteries. Tactical bombers clear all the approaches to the captured point, then throw the infantry into the battle. Often change the attacking unit.
The fortified area is an excellent place for defense. Defending the city, put in it at least one gun of each kind.
When you attack an object on an airplane, check that there are no enemy covering fighter jets and antiaircraft guns around.
The General! Do not attack anti-aircraft guns, and tanks-anti-tank guns. And do not leave the unreached cities in the rear. Do not allow enemy tanks to their artillery and anti-aircraft guns.
Lightning speed is the key to victory. Capturing the city, enter it before the enemy - and you are almost a winner. Captured cities give you extra money that can be turned into new troops and equipment.
Strive above all to dominate in the air and at sea. Destroy the ships and planes of the enemy - and soon the land will yield to you.
In each campaign, choose your tactics.
In Africa, it is better to divide your army into two parts: send one (mostly infantry) along the coast, and throw tanks through the desert to Tobruk. It's also good to drop the landing near Alexandria.

Question mark - go to the setup menu.
Two rectangles - a small map.
Tank and aircraft - switching from ground units to aviation or vice versa.
Hexagon - marking the theater of military operations with hexagons.
Yelochka is a territory that is not occupied by troops.
Binoculars - getting information about any detachment.
Weather - information about weather conditions.
Tank with an arrow to it, viewing the list of units with information about them.
The tank with an arrow from it - the transition to the next detachment. By clicking on "Go to unit", you take control of the selected unit by yourself.
Game options. "Compaign" - here take command of the German troops from the very beginning
the beginning of World War II. Successfully performing tasks, it is possible to conquer the whole world. "Scenario" allows you to choose any scenario and the side for which you will fight. The table of possible scenarios was placed in the book "50 games for 3DO", published in the first half of 1996.

"M" - return to the main menu.
Three strips - setting the difficulty level.
Spyglass - to make visible or hide all units of the enemy.
Filmstrip - a mode of animation of fights (accompanies battles by shooting).
Cloud - turn off the weather change mode.
Barrels - the mode of consumption of ammunition and fuel in the course of the game.
The note is a musical accompaniment.
Pipe - sound effects
"10" is the mode of indicating the number of detachments.
Nicks are lists of losses on both sides.
‹
›
Home
View web version