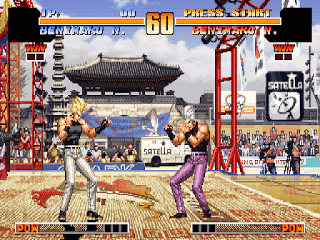 Genre: Action
Perspective: Side view
Visual: 2D scrolling
Art: Anime / manga
Gameplay: Fighting
Published by: SNK Corporation
Developed by: SNK Corporation
Released: 1998
Platforms: PlayStation (PSX, PS1), Neo-Geo
The year 1997 could not pass without the release of the next series of the incredibly popular fighting game The King of Fighters in the nineties. And this game has become a landmark for many fans of such entertainment. Almost everything has undergone changes, the graphics have noticeably improved, in general the game has become more dynamic and more pliable. Not without tradition, and without new characters - it was in the ninety-seventh KOF that they began their journey as a fighter in the Blue Mary series, Yamazaki and Shingo - a simple Japanese boy whose idol is not just anyone, but the main character of all games from the series KOF, Kyo Kusanagi! The developers also came up with new villains, which a separate team has gathered here.
The plot of the game closes the arc of Orochi Saga. At the annual tournament The King of Fighters, a mysterious team appears, introducing themselves as musicians Chris, Shermie and Yashiro, but as it turns out later, they are not at all who they say they are. Who are they and what are their goals? And why did Iori Yagami suddenly feel the spirit of Orochi inside him? Why does Leona Heidern suddenly become possessed by the same spirit? And who challenged Kyo Kusanagi? All this is for you to find out.
From the point of view of gameplay, the game has not changed much, except that two modes of energy accumulation for super attacks appeared, which later became the standard. In all other respects - a great fighting game, one of the best in its genre. Over these games, time has no power.
‹
›
Home
View web version