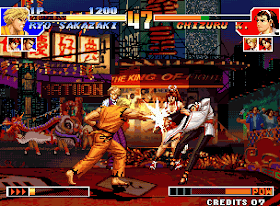 Genre: Action
Perspective: Side view
Visual: 2D scrolling
Gameplay: Fighting
Art: Anime / Manga
Published by: SNK of America
Developed by: SNK Corporation
Released: 1997
Platforms: Neo-Geo, PlayStation (PSX, PS1)
King of Fighters '97 is a fighting video game belonging to the series of games The King of Fighters. It is the fourth of this saga, and the game marks the end of the Yamata no Orochi story (made up of KoF '95 and KoF '96).

KOF '97 introduces two game modes for this occasion. The game modes are known as Advanced and Extra. The Extra mode includes all the features of the first two versions based mainly on KOF '94 (static dodge, loadable POW bar at will, Hop Dash and power to make Desperation Moves with life blinking red).
Advanced on the contrary, it brings together all the features of KOF '96 with some slight changes. To begin, now the POW bar is no longer voluntarily loaded. The bar must be filled by performing normal or special blows that impact or receive the attacks. When it is full, we notice that at the end of the bar there are three boxes (it is the maximum in this version) which when it is possible to fill the POW bar, we will have a green point called Stock and the points can be passed from fighter to fighter with some restrictions. A stock can be changed by a Desperation Move, a Max Counter (an attack that is carried out by pressing C + D at the same time while we defend which interrupts the guard and connects a blow that subtracts some life from the rival) rolling that nullifies any attack and that facilitates the counterattack while we are defending ourselves. When you have more than one Stock and you press A + B + C at the same time, a POW bar will appear that will act in the same way as if we have the POW bar to the maximum in the first two games with all its characteristics and as an addition , if we have another stock and carry out a Desperation move, we will have its super version available as if we had the life bar flashing red and the POW in MAXIMUM in the previous delivery, besides we will not lose the above mentioned bar allowing us to make another Super Desperation Move while the bar is active. This time the defense in the air (which is common in both game modes) loses effectiveness since we will not be able to use it to defend against Desperation Moves. Following the Advanced mode, the game has included a scheme called the Partner Relationship System which consists of the following: wrestlers (in case of having chosen the Advanced mode) will pass the stocks under certain conditions in which if they relate well, neutral or wrong with another fighter there will be changes in the transfer of stocks. In this way if a fighter gets along with his teammates, he will spend all his stocks plus one as a gift. If you have a neutral relationship, you will pass all the stocks you have and if you get bad, you will not pass any stock. To find out how the characters relate to each other, we must press the C button on the order selection screen of our fighters. A smiling face will indicate the first possibility, a neutral face will indicate the second possibility and an angry face, the last possibility.
The system of Combos, present in the previous game, has been improved considerably since a freezing of the game at the time of realizing Moves, makes these movements are easy to combine creating more devastating combos.

After the death of Goenitz, the tournament became more commercial, and people from several parts of the world wanted to observe the tournament. In the teams there were changes as well as new equipment: The New Face Team (lit. the new faces) and the Outlaw Team (lit. outlaw or rebel). The first one is formed by Chris, Yashiro Nanakase and Shermie. Little is known about this team, and it is strange that they have not been invited in the previous tournaments to see their skills in this tournament. The second team was composed by Ryuji Yamazaki, Billy Kane and Blue Mary. Yamazaki's fighting style resembles that of Iori, but the first most cruel. The tournament started and, curiously enough, Kyo and Iori do not fight on this opportunity. During the tournament, the "New faces team" along with Leona and Iori mysteriously disappear. Iori and Leona became present again, but totally changed, beginning to attack all the competitors. Orochi's presence was ready. Before this, the "New faces team" revealed that they worked with Goenitz and its mission was to awaken to Orochi. Although the other teams did everything to avoid it, it was useless, Orochi leaves the body of Chris, and there is only one way to avoid it.
‹
›
Home
View web version