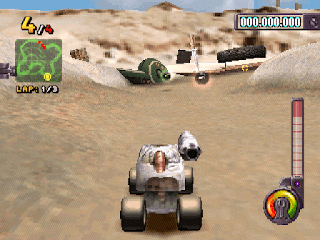 Genre: Action, Racing / driving
Perspective: 1st-person, 3rd-person
Gameplay: Arcade
Published by: THQ Inc.
Developed by: Atod AB, HotGen Studios Ltd.
Released: 2001
Platform: PlayStation (PSX, PS1)
As soon as you start the game, you immediately understand that this is a racing game in which, in addition to being able to skillfully control your car, you also need to use weapons no less skillfully. Brightly lit, sparkling neon trails; great music, numerous weapons, armored vehicles. In general, you have already met with this, but the main difference of this game from other games of this kind is that your cars can be transformed, for example, into a jet plane, into a speedboat, an all-wheel drive SUV, etc. Each track is divided into sections, on which, in fact, these transformations take place. At the beginning of such a section, you are "sucked" into a sparkling portal, from which you fly out onto already transformed cars and then rush along the track to the next section. Weapons are traditional for these games, mainly mines, rockets, etc. True, it should be noted that the flamethrower looks just brilliant.
Initially, you have 4 cars and 4 tracks at your disposal, from which, in fact, you can choose. Further in the course of the game, you can get access to 4 more cars and 4 more tracks, which, of course, is absolutely not enough for a modern game. And finally, you can almost always come first or, at worst, second, simply drowning the acceleration button into the floor, crashing into all walls and obstacles, so, in essence, no special skill is required.
‹
›
Home
View web version