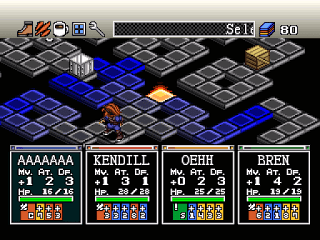 Genre: Role-Playing (RPG), Strategy / tactics
Visual: Isometric
Art: Anime / manga
Gameplay: Fighting
Published by: A1 Games
Developed by: Success Corp.
Released: 2001
Platform: PlayStation (PSX, PS1)
Your treasure hunter, along with three others of the same kind, is released into a confined space to search for target items. Of course, you will face many dangers, such as disguised traps, other aggressive hunters and all sorts of evil spirits that live in the labyrinth. After taking the ordered item, you need to get to the exit, but this is much more difficult to do than to say, since the character who finds the required item immediately becomes the main object of persecution from everyone else.
Battle Hunter or simply The Hunter is a game that combines several genres, namely tactical RPG, board and logic game. At the beginning of the game, after choosing a character, coloring it up, giving a name and distributing points, you go to an unshaven pawnbroker and receive a task, after which you go in search of a certain thing (artifact). The action takes place in an isometric view, the characters are sprites, the moves are determined by rolling dice, and the combat switches to fighting where you exchange blows, both with monsters and with opponents. The game includes support for up to 4 players.
‹
›
Home
View web version