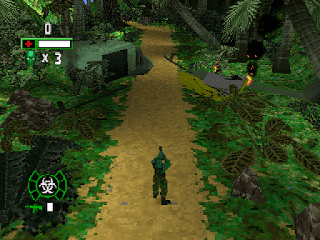 Genre: Action
Perspective: 3rd-person, Side view, Top-down
Gameplay: Arcade, Shooter
Setting: Sci-fi / futuristic
Published by: 3DO Company
Developed by: 5000ft Inc.
Released: 2001
Platform: PlayStation (PSX, PS1)
Another Shooter and another game of the series about Soldiers from the company 3DO. Army Men: Green Rogue is a third-person shooter game with an uncomplicated plot, not very advanced graphics and rather monotonous gameplay - just go ahead, so that the trunks do not cool down (otherwise the hero will cool down due to the tram incompatible with life). Through DNA modification, the Greens bred a new type of soldier. And this is no longer just a soldier, this is a Soldier who is what is called "a warrior alone in the field" and you are just the one who will have to manage this not very gifted, but deadly warrior and your goal is the insidious Tan (brown) and their Allies. Victory will be ours...