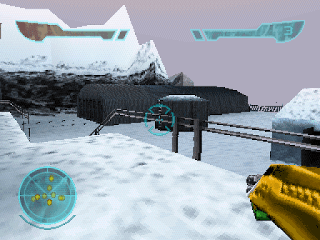 Genre: Action, FPS
Perspective: 1st-person
Gameplay: Shooter
Setting: Sci-fi / futuristic
Published by: Acclaim Entertainment
Developed by: Acclaim Studios Limited
Released: 2000
Platforms: PlayStation (PSX, PS1), Nintendo 64 (N64)
A unique (PlayStation format) first-person shooter game with a story based on a fantastic alien insect invasion of our native Earth, seeking to take it over, destroy all of humanity and turn our green planet into a real nest for disgusting insects. You put on an absolutely amazing battle suit that has amazing durability and allows you to fight and defeat the disgusting alien monsters that literally attack you in whole packs. At each level, you need to fulfill certain goals and objectives. For example, rescue hostages, activate switches, destroy monstrous alien creatures, in general, do everything in order to make the planet safe for life again. You operate in four exotic territories in different parts of the globe; winter desert spaces of Siberia; in the impenetrable jungles of South America, etc. and, in the end, even go into outer space to finish off foreign aggressors on their own territory. Of course, the armored suit you are wearing is developed on the basis of the latest achievements of science and technology, which are only known to modern scientists, but it can only protect you, but in order to destroy the enemy, you need to use equally modern military weapons, and in the game Armorines its more than enough. True, you do not have primitive army conventional weapons. This time your suit comes with amazing gauntlets that allow you to shoot lasers, launch rockets and perform other offensive actions. There are also several types of combat vehicles that you control in the course of hostilities, taking the position of a shooter. All these combat vehicles move on rails, and you don't even have to think about driving skills. You just need to shoot, shoot and shoot.
Graphically, the game is built in such a way as to create an atmosphere of the appropriate nature of the fighting. There are many dark and gloomy military camps, underground structures and factories and a bunch of terrible and vile insects. There is a lot of fog in the game. Perhaps the developers even slightly overdid it with this factor, but it creates a continuous sense of danger and tension. At the same time, of course, it is quite difficult for you to have time to repel the attack of nightmarish arthropods, which, in turn, can quietly and unexpectedly get close to you and spray you with a deadly toxin. The sound effects are simply amazing: the powerful roar of weapons, the nightmarish cries of alien arthropods, heart-rending cries for help. Everything seems to be aimed at ensuring that you fully appreciate the atmosphere of nightmare and violence, and realize the danger threatening humanity. Management is quite clear, organic and efficient. Using the analog joystick, you will be able, with sufficient skill, to deal with all enemies and eliminate the impending danger. In addition, Armorines: Project S.W.A.R.M. one of the few shooters for the PlayStation where co-op is possible.
‹
›
Home
View web version