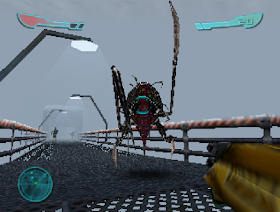 Genre: Action, FPS
Perspective: 1st-person
Gameplay: Shooter
Setting: Sci-Fi / Futuristic
Published by: Acclaim Entertainment
Developed by: Acclaim Studios
Released: 1999
Platforms: Nintendo 64 (N64), PlayStation (PSX, PS1)
This first-person shooter is based on the comic book "Armorines" from the company "Valiant Comics".
Once on the home planet for 1000 years of reproduction has become crowded, hostile aliens, superficially similar to the terrible giant beetles, invaded Earth, causing chaos and destruction on it. They easily defeated the army of serpents and released a poisonous cloud that almost completely exterminated humanity. The last hope is a detachment of infantry Armorines, dressed in special suits, which were developed specifically in the event of a nuclear war.
Battles take place in four territories that the aggressors have chosen as invasion points: a military base in Siberia, an ancient castle in the South American jungle, a volcanic island in the South Pacific and a desert in Egypt. Also waiting for the battle in the beehive of alien beetles.

On a choice of 2 characters: Tony Lewis, Private. Armed with a bayonet for close combat, shotgun and a rocket.
Myra Lane, the private. Armed with an electric shocker for close combat, submachine gun Sub-machinegun Stule and grenade launcher.
In addition to this weapon, the game also has equipment that can be found in a certain location and can not be transferred to another mission. Sometimes it is dropped for you from the air.

The following weapons can be found only in a specific territory:

The volcanic laser causes severe damage from a long distance.

A chemical cannon is dropped from the air, and finding it is not easy.
Anaconda is the sacred weapon of the Aztecs. Clicking on the belly of the snake, you will trigger a powerful jet of poison, capable of destroying any living organism.

Pulsar Sonic Cutter will also be dropped from the air.

The ray of the pharaoh is an ancient weapon captured by beetles. Has a huge destructive power when fully charged.

Steel vibrating blades against which no alien armor can stand.
Unknown weapons, information about which is strictly classified.
The duties of both infantrymen include both the destruction of the aliens themselves and their weapons, which can sometimes be found on the way. Or it can be used against aliens. Do not forget that as soon as the defensive ability of the suit to go down to zero level, it will self-destruct along with you, so as not to get bugs. So, it is in your best interest not to bring such a thing. Of course, at the levels you can find special lotions that will restore the damaged suit.