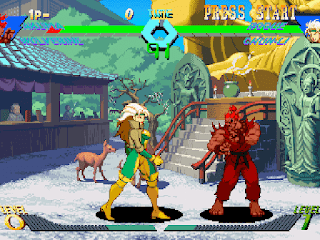 Genre: Action
Perspective: Side view
Visual: 2D scrolling
Gameplay: Fighting
Published by: Capcom Entertainment
Developed by: Capcom Co.
Released: 1998
Platforms: PlayStation (PSX, PS1), Arcade Machine
The arcade version of this game, as well as the Saturn version, are famous for having a Tag Team mode that allows you to choose two fighters at the very beginning and switch from one to the other between fights. However, this mode is available only with a memory card, and without it, the pleasure is not at all the same. In addition, ''EX'' means that players can combine individual moves into powerful combos (similar to Street Fighter EX Plus) attacks to keep the enemy from coming to his senses. For the PlayStation, it was a novelty, which in itself is not bad.
You are offered 17 fighters - these are the heroes of Marvel comics, and the cream of the Capcom Street Fighter catalog. The game is very colorful and dynamic, each character is original, bright and capable of many different movements, but all this diversity and flickering quickly tire the eyes.
Another example of this game's apparent unsuitability for the PlayStation is the obscenely long loading times that turn a trifling duel into real torture. Let the combat qualities of X-Men vs. Street Fighter is far superior to Street Fighter Alpha, it was released extremely untimely and with its 2D comic graphics it seems like just a lame mess compared to Tekken 3. But if you have long-standing serious feelings for Street Fighter, then why not get acquainted with the new series, even if it is inferior to its predecessors?
‹
›
Home
View web version