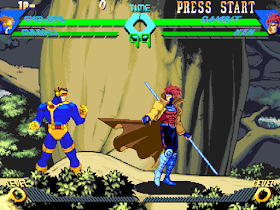 Genre: Action
Perspective: Side view
Gameplay: Fighting
Visual: 2D scrolling
Published by: Capcom Co.
Developed by: Capcom Co.
Released: 1996
Platforms: Arcade Machine, PlayStation (PSX, PS1)
The third in a row Capcom fighting game with Marvel Comics characters and the first part of the Marvel vs. game series. Capcom. As the name suggests, the game includes characters from a Marvel comic called “X-Men”, as well as from the Street Fighter series from Capcom. In 1996 it was released on arcade machines, but was later ported to the Sega Saturn in 1997 and the PlayStation in 1998.
Gameplay X-Men vs. Street Fighter is similar to Street Fighter, but unlike it, each player must choose two characters to participate in a one-on-one battle, trying to defeat the opposing team. Players have the opportunity to switch between their characters at any time of the match. The gameplay also includes numerous elements from X-Men: Children of the Atom and Marvel Super Heroes.
After the release of the arcade game machines, the game received generally positive reviews from critics who praised its gameplay and high-quality animation. The Sega Saturn version was also praised for preserving all the gameplay moments of the original version, but the PlayStation version scores were already much cooler for cutting out several features of the fighting game. Changes were made due to technical limitations of the PlayStation. Sequel game, Marvel Super Heroes vs. Street Fighter, released in 1997.

Like other games in the series Street Fighter, X-Men vs. Street Fighter is a 2D fighting game in which players, controlling various characters, are engaged in one-on-one combat, trying to defeat an opponent, exhausting his health. A feature of the game became team battles. Also the matches in this game consist of one round instead of three. Players choose two characters at the beginning of a match, each of which has its own scale of life.

All versions of the game have two modes: Arcade and Confrontation. In Arcade mode, the player fights with several teams of enemies controlled by artificial intelligence, and at the end participates in the battle against the boss, Apocalypse, the antagonist from the “X-Men” series. In Opposition, two players can fight against each other on a local network. The PlayStation version also has a learning mode where the player can practice against non-aggressive opponents, and a survival mode where you can fight off endless waves of enemies.