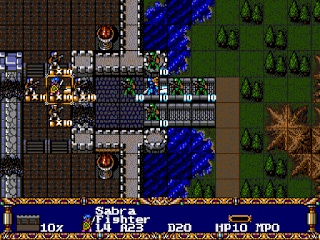 Genre: Role-Playing (RPG), Strategy / tactics
Perspective: Bird's-eye view, Top-down
Art: Anime / manga
Pacing: Turn-based
Setting: Fantasy
Published by: American Treco Corporation
Developed by: NCS Corporation
Released: 1991
Platform: SEGA Genesis / Mega Drive
Prince Garett, the son of King Alfador, the ruler of the Baltics, must escape from his native castle, besieged by enemies. He needs to get his hands on the legendary sword Warsong, stolen by enemies, since only with its help can the forces of evil of the Dalsis Empire be defeated.
In 1991, the Japanese company NSC / Masaya released Langrisser - a game that is mediocre by modern standards, but quite a full-fledged tactical RPG. In the same year, Treco re-released the game in the United States, changing the name to Warsong, the names of the characters and the storyline of the game. By the way, the English version was not as successful as the Japanese one.
A peculiar, but interesting game, in the manner of chess. If you are a fan of strategies and slow-paced battles, then this is the game for you.
The first part is a middle class game, no frills. The second part claims to be the best RPG with a strategic bias, perhaps second only to Vixen 357, which uses the same engine. However, both games from the series have good graphics, great sound and will interest all fans of the RPG genre.
‹
›
Home
View web version