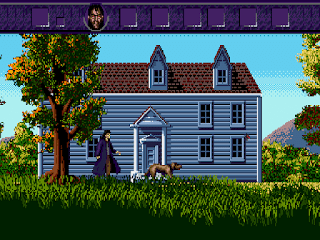 Genre: Action
Perspective: Side view
Visual: 2D scrolling
Gameplay: Platform, Puzzle elements
Narrative: Horror
Published by: Acclaim Entertainment, Trimark Interactive
Developed by: Realtime Associates
Released: 1994
Platform: SEGA Genesis / Mega Drive
After watching a short intro, you should understand the essence of the game and the motivation of the main character. You need to collect all six warlock stones. You will have to collect these stones over 13 stages, which will be very, very difficult to pass.
The game starts immediately, without any overclocking and chewing. The player from the first minute gets into a storm of mystical events. He is immediately attacked by bats, werewolves, zombies and the dead. The gloomy sky, the sound of thunder and the flashing of lightning, the attacks of an evil magician who sends a lot of trouble to the player in the form of the already mentioned fiends - all this falls to the player from the very first minute of the game.
Throughout the game, the player will control a guy who knows how to use magic. One of the magics is that he holds a fireball on his weight, which can launch up, down and straight at opponents for a certain distance. The other magic is a simple magic wave that can also be fired at enemies.
Don't rush ahead headlong. This is not Super Mario Brothers for you - it won’t work here just to run and bypass opponents with one jump. Warlock will not be able to go ahead as in the same Castlevania. With such pressure, opponents will soon simply kill you. It is worth choosing a cautious and prudent tactic for passing the levels of this game. Before you run forward, look up at the ceiling - is there a wobbly candelabra that is about to fall on anyone passing by? Do not touch these disgusting opponents - this also takes away the health of the hero. If the path is blocked by a magical door, do not panic, you need to look around - is there a switch responsible for this barrier? If not, then run back - to where you did not go, and perhaps there you will find a way. The game is based on the principle, although it is simple and linear, but it requires a little logic and tactics from the player.
The graphics in the game look good. Beautifully designed locations in different dark styles: from gothic cemeteries to oppressive dungeons, from flat areas to steep cliffs. The levels are well designed, including close and far shots. Various types of opponents: crows, spiders, ghouls, werewolves, vampires, bats, ghosts and ghosts - all this and more will be in the game, and in good performance. Another feature is that the player's health indicator is shown in the form of a character's head. When the enemy strikes, then a bloody scratch appears on this indicator (that is, the head), if the player is hit again, then the character’s face is already severely disfigured, etc.
The music in Warlock is permeated with mysticism and the heavy spirit of the events of the game. The music fits the game perfectly. Oppressive and characterizing the game process to the maximum. What more do you need from music? Matches the game and that's the most important thing. Well, of course, she also looks quite good without the game in general terms. So the music in this game gets a positive assessment.
‹
›
Home
View web version