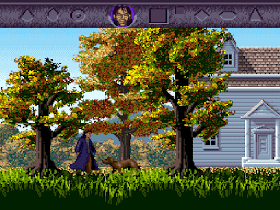 Genre: Action
Perspective: Side view
Visual: 2D scrolling
Gameplay: Platform, Puzzle elements
Narrative: Horror
Published by: LJN, Trimark Interactive
Developed by: Realtime Associates
Released: 1994
Platforms: Super Nintendo (SNES), SEGA Genesis / Mega Drive
The cult horror movie in the form of a video game is once again challenging gamers. The version on SNES is even more hardcore, which cannot please those who have already played this game on other systems. Warlock, the only son of Satan, again intends to give the world into the power of his parent by all means. You have to go through various stages of the game to find the runestones that can stop the plans of the insidious sorcerer. To deal with numerous enemies, there are magical discharges that immediately turn bloodthirsty living creatures into a bunch of smoke, you can also control the ball, all the time hovering over the character. In some battles, you need to stubbornly choose a strategy in order to emerge victorious and stay alive with all your might, so that hell does not come to our land. In general, a very successful horror action game, and one of the few worthy implementations of the film of the same name.
‹
›
Home
View web version