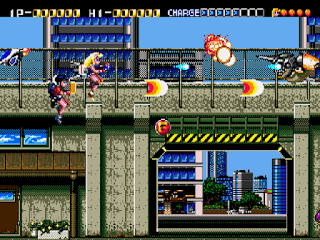 Genre: Action
Perspective: Side view
Visual: 2D scrolling
Gameplay: Shooter
Setting: Sci-fi / futuristic
Published by: Vic Tokai
Developed by: Vic Tokai Corporation
Released: 1991
Platform: SEGA Genesis / Mega Drive
Trouble Shooter or Battle Mania (name of the game in the Japanese region). The player will take control of a team of two girls who need to save the prince from the clutches of an evil weapon genius and his army of robots. Our partners will fly around the level with the help of rocket packs, and one of them at the same time has the ability to fire both to the right side and in the opposite direction, besides, she is also invulnerable to enemy attacks. In total there are six levels in the game and before the start of each one you will be asked to choose a special weapon, during the flight through the game stage it is possible to use it repeatedly, you just need to wait a bit for it to recharge. The heroines have a live bar, which is replenished with the help of hearts found on the level. Also, as in other games of this genre, it is possible to upgrade weapons with the help of bonuses flying out of some opponents.
‹
›
Home
View web version