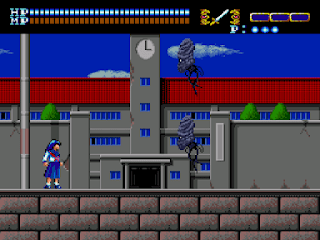 Genre: Action
Perspective: Side view
Visual: 2D scrolling
Art: Anime / manga
Gameplay: Platform
Setting: Fantasy
Published by: Renovation Products
Developed by: Telenet Japan Co.
Released: 1991
Platform: SEGA Genesis / Mega Drive
Yuko would never have thought that she, a modern schoolgirl, a girl, was destined to become a knight of Valis. At night she had a strange dream, and someone's voice tried to tell her something. The next evening, when Yuuko was returning from school, it began to rain like in her dream, and her best friend Reiko behaved incomprehensibly, muttering that she was going somewhere far away, and Yuko also had a long journey ahead. And then all the people disappeared at once, crumbled asphalt splashed from under their feet, and a monster crawled out, which can only be found in scary tales. And there's nowhere to run. And then a voice familiar from the dream said: "Hold the sword of Valis." A sword spontaneously appeared in Yuko's hand, which she instinctively swatted away from the monster... At the top left of the screen, there are two rulers showing the levels of health and magic. (But at the first stage, Yuuko has not acquired magic yet). On the right is a sword, and next to it, three stripes reflect its power. There are different swords in the game, and by carefully collecting prizes from hanging crystals, you can get one that shoots balls of energy when swung. And having picked up the image of the sword three times, we get the maximum power, and when swung, the balls fly like a fan. You will manage Yuko as follows. By pressing the A button, you will make the girl slide on the ground, which allows you to avoid some attacks and jump through the holes on the way. The technique is also useful when jumping from platform to platform. Button B allows you to hit the enemy with a sword. If, while standing on the ground, hold down ↑ and press B, you get magic. C - jumps.

Run to the right, destroying the enemies you meet and collecting prizes from the crystals (don't forget about the crystals on the roofs of houses). Once in the subway, at the dead end with a hole in the wall, do not miss the crystal with an extra life. The boss is no problem, and after defeating him, Yuuko receives the first piece of the crystal with earthquake magic (Earthquake, MP 06).
And now Yuko is standing on a snow-covered hill, still thinking whether this is a dream or reality. But everything is cleared up with the appearance of the sorceress Valiya. It was she who handed the sword to the girl, because Yuko is the only one who is able to save the fantasy world from the dark emperor Rogles, who crushed the balance crystal (yin-yang) into six parts and distributed these parts to his six strong warriors. The sorceress invites Yuuko to collect the crystal together so that the balance between
light and darkness. The girl tried to argue that she was not strong enough, but Valiya dressed Yuuko in armor with a careless wave of her hand and disappeared with that.

Snow and snow all around. Moreover, various monsters, including a new biological species - ice worms. But when you have a powerful sword, even the boss is not terrible - a flying person who throws snow grenades at Yuko. The second part of the crystal is yours.

Lava floods everything, puddles of fire underfoot. At this stage, in one of the crystals, you can find the Valis sword of a new form - with a wavy blade that fires a plasma beam in a straight line. At double power, the sword emits two beams, and at full power, three, with one
from the rays beats back. The stage boss is a Valkyrie in black armor. Not only does she cleverly jump around, kicking and unleashing a series of sonic waves, but she launches a fiery snake around her. This snake not only attacks, but also protects the Valkyrie from your attacks. Therefore, hit the enemy from a distance, without getting too close. But after the victory, taking the third part of the crystal, you yourself will be able to use the services of a fiery snake (Flame Ring, MP 10).

The place is mountainous, armored creatures are difficult to destroy. At the beginning of the path, do not take the crystal - it contains a weaker sword than you have now. In difficult moments, apply Flame Ring.
The boss, wrapped in a white robe, flies across the screen, surrounding himself with a white halo and sending white whirlwinds across the ground. And upon landing, with a careless wave, he throws a couple of boomerangs (which, however, do not return). Such is the tactics of dealing with him. When the boss descends, start shooting in a jump and activate the Flame Ring at the moment the boomerangs are launched. Well, when it takes off, fire at the boss on the road and immediately run away to the other side of the screen, otherwise you will get from the tornadoes released by the boss. Do everything correctly - get another part of the crystal and magic Tornado (MP 12).

Ruins, a lot of snakes, someone's jaws and skulls fly in the air. Soon you will come across a new form of the Valis Sword, which, when swung, will fly out homing arrows. After passing through the building, you will find yourself in a hall where something sticks out from under the floor. The floor collapses, and this "something" turns out to be the dragon's back. Stand in the middle, dodge spitting bubbles, and your arrows will aim at the enemy on their own. With such tactics, it remains only not to fall under the lightning, and the dragon is defeated. Get a piece of the crystal and the magic Giga Thunder (MP 14), which allows you to shoot lightning all over the screen.

The forest, the air is clean, but full of harmful creatures. You will definitely need to take and strengthen a new kind of sword with a bright yellow blade. With it, you can launch a powerful sonic wave (and at full power of the sword - and the second, directed upwards), which flies across the screen at great speed. The boss fight is one of the hardest in the game. The boss - a girl with copper hair and dark armor - is somewhat familiar to us. She also jumps vigorously, launches sonic waves and uses slides. Directly one with Yuko school. Suddenly, the red-haired girl freezes in place, sword raised above her head. This means that she is about to cast powerful magic that can kill you completely (or almost). Therefore, make every effort to have time to win before the magical blow. But then the opponent fell, and Yuko saw that it was ... Reiko! It turns out that she became a knight of Rogles.
Let's skip the sentimental dialogue between friends who have become enemies. Better take the last piece of the crystal, Death Flash magic (MP 18) and go to Rogles' castle.

The path runs through the bridge to the castle. Here, use the sword with arrows to fight off the flying sorceresses and well-protected knights (aim at their legs). Entering the castle, carefully, slowly, go forward. Don't miss the crystal with the most powerful sword form. When swinging it, a clot of energy flies out, which, after flying a little, explodes like a grenade. Check all the other crystals along the way, reach full power of the sword, take an extra life, and here you are ready to meet with Rogles.
The villain appears wrapped in a black cloak. Shoot it with sword energy, dodging the fiery snake that Rogles periodically releases at you. Take care of the upper left corner of the hall, where the health regenerator is hidden. And hold your magic until the time when the dark emperor takes on a combat form and starts rushing around the screen, releasing plasma balls in flight, and upon landing - a sonic wave. Here, use the Flame Ring magic - it will cover you from enemy shots.

Rogles is defeated and Yuuko is back in her school uniform. So was it a dream or not? Yuko thinks. She looks around and sees that it is a bright sunny morning. “But the story began in the evening,” the girl recalls, “and if it was a dream, then where did I spend the night?”
‹
›
Home
View web version