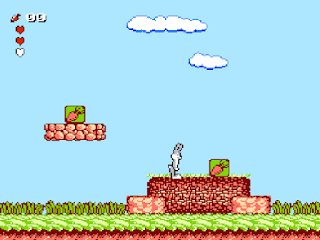 Genre: Action
Perspective: Side view
Visual: 2D scrolling
Gameplay: Platform
Published by: Kotobuki System Co.
Developed by: Kotobuki System Co.
Released: 1990
Platform: Nintendo (NES)
Bunny Bugs Bunny turned 50 and was invited to a massive party in his honor. Only the negative characters of the Looney Tunes cartoons are dissatisfied - the hunter Elmer J. Fudd, the cowboy Yosemite Sam, Wile E. Coyote and the cat Sylvester, who were not included in the list of invitees. They intend to resort to all possible tricks so that Bugs does not get to the party, thereby disrupting it. And now, in order to be on time, the brave rabbit will have to dodge insidious traps and fight hordes of enemies.
In terms of gameplay, "Bugs Bunny Birthday Blowout, The" is a typical 2D platform game. The player, controlling Bugs Bunny, must alternately overcome a series of platform levels, butchering or dodging numerous opponents and collecting bonus items scattered throughout the levels.
The game consists of 6 stages, each of which in turn is divided into 4 levels. At the end of each stage and every second level of the stage (1.2/2.2/3.2, etc.), the player will encounter a boss - a particularly strong opponent who must be hit with a hammer several times before he is defeated. Bosses, like Bugs Bunny, are various Looney Tunes cartoon characters - Yosemite Sam, Vile E. Coyote, Tasmanian Devil and others. At the end of the remaining levels, Bugs is confronted by Daffy Duck, who, however, does not need to be fought, it is only necessary to avoid him, touch the image of a large carrot, after which the level ends. After each stage, a small bonus game is built in, in which the player can, using the carrots collected for the level, try to win additional game lives for their character.
‹
›
Home
View web version