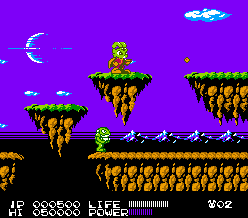 Genre: Action
Perspective: Side view
Gameplay: Arcade, Shooter
Setting: Sci-Fi / Futuristic
Published by: Konami
Developed by: Konami Co.
Released: 1992
Platforms: Nintendo (NES), Arcade Machine
At the heart of the game is the animated series "Bucky O'Hare and the Toad Wars." We play for the great Baki O'Hare, and we must save our friends from the Empire Toad Empire. For those of you who know nothing about Baki O'Hare, I will say that he is a hare who fights for justice.The protagonist came out with a cartoon in the early 90's, and now in "Konami" they decided to make a game for the platform NES.
Konami made a few big hits for NES, of which there were rumors: "Contra", "Castlevania" series, games based on popular heroes from "Teenage Mutant Ninja Turtles" and "The Goonies", as well as many other projects . Nevertheless, about many of their latest releases for NES, almost nothing is audible. "Bucky O'Hare" is one of those games - it could be a very big hit if it were better spread in its time. The game is very rare, and it is one of the best for NES.
According to the plot of the game, Bucky must save all his friends (except for Bruzer). Dead-Eye Duck, Blinky the robot, Jenny the Cat and Willie DuWitt (DuWitt, boy genius) are on four different planets, and we need to go to each of them And save from the clutches of the Empire. From the very beginning, we have an opportunity to choose one of the four planets that can be passed first. After the victory in each level, we will save one of the friends, and he will join the team. After saving the next member of the team, we have the opportunity at any time to switch between rescued characters with different abilities (Blinky can destroy ice and stone blocks, the Duck can climb walls, and Bucky O'Hare himself has a unique ability to shoot down during a jump) . In general, the whole process of managing characters in this game with the replacement of the hero and using his abilities is a very successful and well-realized idea!
The graphics in the game are excellent! Each stage has its own atmosphere and original structure (it will be necessary to climb trees and explore river open spaces on a green planet, make a difficult trip to the yellow planet, etc.). Attention! "Bucky O'Hare" has one graphic feature that distinguishes it from all NES games: it has scrolled backgrounds !!! This adds a new dimension to the game, and is very, very impressive! Similar was only in the games of the series "Battletoads", but there was only a fairly primitive scrolling in several stages while driving on the technique, and here the most beautiful backgrounds are used everywhere in all stages.
Perhaps the most important advantage of the game is an excellent musical accompaniment. The music is incredible and very suitable to the levels on which it is played (themes on the green and red planets, in the 6th and in the final levels are especially good).
The game is quite complicated and can challenge even the best players. It's just a lot of complicated places: you'll need to avoid lava on the red planet, jump from ship to ship on the yellow planet and encounter some dangerous jumps in the 7th level, not to mention the "dark" areas in the 6th level, the serpent creature On a blue planet and many other difficult challenges. In general, the plot is very, very good. The game has some more interesting surprises, and some really innovative stages, which are not mentioned here. I suggest that you see and feel it yourself in a real game environment!
The gameplay of the game can be described in two words - "action" and "speed", and they are inextricably linked. The speed and pace of this game is much faster than most NES platformers. And it's very cool!
The game is very diverse, during the passage we will meet a lot of traps, from which you can just go crazy (especially in the level of Magma Tanker). There is such a necessary password system for saving. One of the interesting moments: during the game we need to build up the special abilities of the characters. For example, Bucky O'Hare is jumping so high, but if you find special power-ups in the level, he will jump even higher.

All the characters are able to jump and shoot. Rabbit shoots bursts on all four sides. He has a jump amplifier. The Dead Eye shoots a three-stringed fan of fireballs, it is able to stick to walls and to the ceiling. Willie is armed with a heavy laser, not fast, but very powerful. In addition, by spending additional energy, it can additionally focus energy. Blinky knows how to throw bombs and is equipped with a jet engine. Jenny strikes enemies with the power of thought, and concentrating, releases an ectoplasmic ball. To use additional features, accumulate accumulation plants. They are marked with the letter "P".

The most serious obstacle on the Green Planet is the jungle. The accuracy of jumping on vines is important. To collect all the prizes at the surface of the water, try to foresee how the logs floating below will move.
Beware of fish in streams. Do not stand on the edge of a log.
In order not to please the giant waterfall, listen - the sound of falling water warns you in advance about the danger.
Dodging cobblestones, collect counter-prizes - will be useful at the next level.
When you are attacked by a monster with a hefty stone above your head, approach it closely (this will save you from a hail of debris). Then pass the giant to the wall and do not hesitate to shoot him from behind - in front he is not vulnerable. Repeating these actions four times. You will release captive Blinky.

Having noticed on the horizon traces of volcanic activity, try to run back. Do not fall at the same time in the gushing fountain.
To cross the lava lakes, Bucky must fill them with stones.
At this level it is useful to take advantage of Blinky's small growth.
Be wary of rolling toad koloboks; They have paws, and in the paws the automatic machine is clamped!
The essential "special possibility" of Bucky: "twinkling" on the rock rolling on the thorns, he can jump on a high wall, and then climb onto the next stray stone. Having completed the wanderings, Bucky is useful to urgently start a "flicker": on his heels follows a huge cobblestone.
To finish off the kolobok - guard of the Dead Eye, shoot at his observation slot, strongly resembling the navel.

On the Blue Planet, the inertial properties of the characters appear. You need to learn to brake. For this you can jump. But faster and safer to squat at the edge of the plate.
Some of the ice blocks (especially - at the ceiling) conceal prizes, which you can get by using bombing. Try, however, not to break the ice covering the ice hole.
Toothed snakes are useful. Be patient, and when the snake leaves, the endless running tape that remains from it will serve Bucky as a bridge over the abyss. But be afraid of the third serpent. The niche at the shores of the third reservoir will be absorbed with all the contents.
In the fifth stage, the main thing is to preserve the inexorably melting ice. The dead eye duckling is convenient here. Shoot waterfowl creatures that melt your ice floe with their flamethrowers. Fry the missile in advance. They are dangerous, but they shoot only horizontally.
Having reached the corridors of the toad base, join the toads, "washing" the blocks heaped up by their congeners. This will destroy the ice structure and take advantage of the opening descent to the lower floors with hedgehogs.
The cache with the heart, restoring life, is dangerous spikes on the ceiling. The same spikes can deprive you of life on the finish line: after starting the lowest torpedo lightning starts to lift the floor, bringing you closer to the points of the thorns.
Be wary also of the hydraulic presses of the lower tier, which prop you up against the ceiling.

Having jumped a mechanical worm, do not rush to run away: having squandered your ammunition, the wriggling piece of iron becomes even useful. However, having grown new cartridges, the worm attacks you repeatedly.
Laser guns, protruding from the craters, attacking from above small boats and reactive toads are destroyed from the second hit.
Three-position gun-eyes well knock rabbit.
The muzzle "cloud" with the developing mouth will serve Rabbit as a "ride", on it he will be able to continue his journey through the air.
In the belt of small asteroids, "clouds-passing", seeing Rabbit, open fire. Therefore, to vertically move on them, carefully count your jumps. Fixed "cloud", on which you plan to move, should be inaccessible to flying stones.
If the trolley on the final steps of your wanderings on the Yellow planet slows down, then it's time to "change the wheels."
In the building choose Blinky, this will save you from the threat of overhanging drills.
When leaving the danger zone. Your transport will slow down, recharge the batteries of the blue cat Jenny. Its ectoplasmic clot will help in future to overcome the lunokhod that occupied the asteroid.
The volcanic cannon of the Lunokhod is preliminarily destroyed by Jenny's weapon. Then, knock down the missile, which launches homing missiles, and the radar locator. After that, hide from the glowing rays of the Lunokhod in the nearest trench, and when the Lunokhod begins to rush around the screen-it's time to attack him with the ectoplasmatic bunch of Jenny.
‹
›
Home
View web version