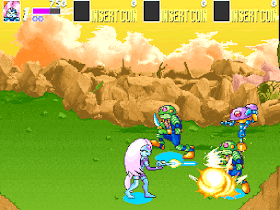 Genre: Action
Perspective: Side view
Gameplay: Beat 'em up / brawler
Interface: Direct control
Setting: Sci-fi / futuristic
Published by: Konami
Developed by: Konami Co.
Released: 1992
Platforms: Arcade Machine, Nintendo (NES)
An excellent representative of his genre. A team of heroes, consisting of a green hare, a cat with pink hair, a duck and a robot, will have to save the planets from the invasion of evil toads. From a long distance, the character shoots, and from close range, he hits. They will also give you the opportunity to jump and fly on a rocket pack. Of course, on the NES Bucky O'Hare is a masterpiece, but on the arcade machines the game amazes with the beauty of its graphics, fully revealed in the final credits, when the Life Force of the Planet is released and all the evil toads and their machines are defeated. And you are the main character of this incredibly beautiful, albeit childish, fantastic action movie, which is very convenient and pleasant to play. Be sure to try!
‹
›
Home
View web version