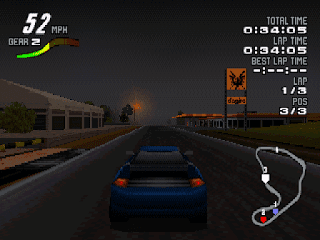 Genre: Racing / driving
Perspective: 1st-person, 3rd-person
Setting: Sci-fi / futuristic
Published by: Fox Interactive
Developed by: Digital Illusions CE AB
Released: 1998
Platform: PlayStation (PSX, PS1)
Motorhead is a racing game set in the near future. Despite the futuristic setting, the cars in the game have a familiar configuration and control method, in other words, they are ordinary cars that are well known to us, albeit fictional ones. There are 10 cars in the game (7 will have to be discovered in the course of the game action) and 8 different tracks, however, not all of them are available from the beginning of the game, the player must earn them by winning championships in the Transatlantic Speed ​​League. The game looks very nice on the PlayStation, but the developers, in an attempt to display 60 frames on the TV screen, obviously overdid it with fog, which is a lot (a long-standing developer trick to save them from additional work or to reduce the requirements for a video card). Fog creates certain problems on the track, especially with sharp turns that emerge at the very last moment, you need to be a real ace to fit in well, and the speed in the game is considerable.
Despite the shortcomings Motorhead captivates graphics and music track. Driving the car as a whole is quite comfortable, albeit a little harsh, but you get used to it quickly. Motorhead is a good game that leaves a good impression, especially when you understand what kind of hardware we run it on, not many games on PS1 can boast such a clear picture (if you forget about fog and think only about cars and tracks), in a word - WipeOut GT , not Motorhead.
‹
›
Home
View web version