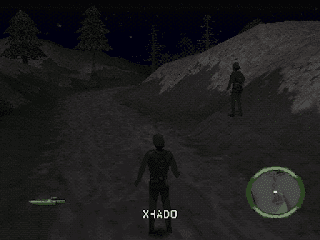 Genre: Action, Strategy / tactics
Perspective: 3rd-person
Gameplay: Shooter
Vehicular: Tank
Published by: 3DO Company
Developed by: 5000ft Inc.
Released: 2001
Platform: PlayStation (PSX, PS1)
The plastic war is deadlocked. Both opponents are in balance... Green intelligence reported - Tan (browns) are developing a deadly weapon for Green weapons, a kind of magical Spell Of Doom. The Green Command forms a special unit of Commandos, each of which has certain skills and is a first-class military specialist in their field, from heavy weaponry to knowledge of languages ​​(although a certain universality is inherent in all). Now the fate of the Greens is in your hands. Train your soldiers, defeat the enemy, take over the world!

As soon as the game (Campaing Game) on the first level starts, run to the guard, finish him off with a knife, then run up to the sign next to which a member of your squad is standing; shoot the barrels and get an M-16 rifle (M-16 Rifle), as well as three grenades. Now you can go left or right.
If you choose to the left, then you should immediately hide in a shelter. Leave a member of your team at the sign (you'll need him a little later), run up to the log, take cover behind it and keep moving stealthily until a few guards jump out. This is where you end them. Note that one of the guards is hiding behind a tent and the other is at the very far end of the small field camp. Once you have dealt with all the guards in the small camp, go back until you see a small path near the small camp almost at the very beginning of the level. Follow it until you come to a sign warning that there is a minefield. Destroy the barrel, get the Mine Sweeper, use it and safely pass the minefield. Shoot the guard in the far left corner and immediately hide for cover. Do not stick out until your friend goes to the left, in fact, where you need to.
If you choose the option to the right, wait for your comrade to go to the left, and he will wait for his comrade to go to the right. Be careful. One guard is hiding in a small tent on the right. Once you finish him off, run to the end until you see a jeep with a heavy machine gun. Both members of your squad are now in the same location. One of them must smash the barrels to smithereens to get a repair kit (by the way, if you choose the wrong character, you won't be able to ride the jeep). So, once you get the repair kit, repair the jeep, bring your soldiers closer to the car and race it to the end of the level. As soon as you get to the bridge, both of your comrades must cross it and thus complete the level. By the way, if you do everything as indicated in the walkthrough, then at the next level you will only have a knife and an M-16 rifle from weapons.

Infinite ammo for the Machine Gun

If you pick up 3 machine guns on the first level, you will get infinite ammo for it.
‹
›
Home
View web version