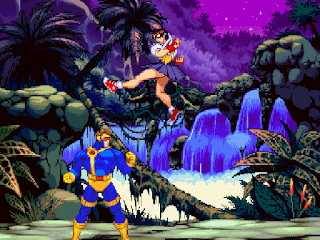 Genre: Action
Perspective: Side view
Visual: 2D scrolling
Art: Anime / manga
Gameplay: Fighting
Narrative: Martial arts
Published by: Capcom Entertainment
Developed by: Capcom Co.
Released: 1999
Platforms: PlayStation (PSX, PS1), Arcade Machine
Marvel Super Heroes Vs. Street Fighter is a 2D fighting game, the first game where characters from Capcom's Street Fighter series meet characters from Marvel comics. It is also the first Capcom game to feature a team fighting style where the player can call on another character during combat.
Matches consist of two-on-two battles in which the player can only control one character at a time. Another character can be called regularly or during an attack. Voice-over also regenerates health while waiting. To win a match, both opposing characters must be defeated, and when one of them dies, the other is automatically summoned. Tag team options introduce variable attack, variable counter, and variable combination where two characters combine to attack, counter, or perform a special move.
Most of the X-Men characters were already present in X-Men: Children of the Atom and Marvel Super Heroes: Cyclops, Storm, Juggernaut, Magneto and Wolverine, with the addition of Rogue, Gambit and Sabretooth. Street Fighter characters are collected from Street Fighter Alpha 2: Ryu, Ken, Cammy/Chun-Li, Charlie, Zangief, Dhalsim, M. Bison, and Akuma. The final boss of the game is Apocalypse.
The PlayStation version does not include a tag team feature and relies on a more traditional two-out-of-three round layout.
‹
›
Home
View web version