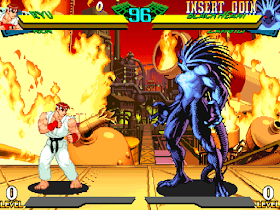 Genre: Action
Perspective: Side view
Visual: 2D scrolling
Gameplay: Fighting, Martial Arts
Art: Anime / Manga
Published by: Capcom Co.
Developed by: Capcom Co.
Released: 1997
Platforms: Arcade Machine, PlayStation (PSX, PS1)
It presented the same game scheme as X-Men vs. Street Fighter with hardly any changes. The player chose two fighters, and could relieve them in the middle of combat at will. He could also use the partner to momentarily hit the opponent without needing to do the relay, as well as doing Super Combos combined between the two.
Virtually all the Street Fighter fighters that appeared in the previous chapter reappear here, except Cammy and Charlie, who are replaced by Sakura and Dan. On the Marvel side they only repeat Cyclops and Wolverine, the others being totally new in this crossover saga.
In the single player mode, he had to make his way through the stages fighting against the different rivals that appear, until the end and fight a duel with Apocalypse, who again became the final boss. When defeating him, appeared Cyber Akuma, a robotized version of Akuma much more powerful.
Both Apocalypse and Cyber Akuma could become selectable if we met certain requirements.
‹
›
Home
View web version