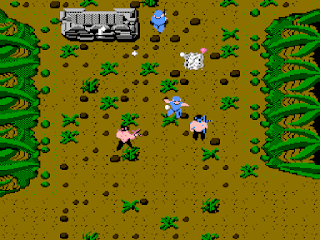 Genre: Action
Perspective: Top-down
Visual: 2D scrolling
Gameplay: Arcade, Shooter
Vehicular: Tank
Narrative: War
Published by: SNK Corporation of America
Developed by: SNK Corporation
Released: 1987
Platforms: Nintendo (NES), Atari 7800
This military arcade was the first in the history of its genre, where characters controlled by a gamepad can move in any direction. Alone or in the company with your friend (game mode for two), you fly over the territory of Vietnam. Unexpectedly, the plane is shot down, but you miraculously survive. Making your way through the jungle and firing back from enemies, you need to find a way to your base.
Considering that this game was one of the first in the shooter genre, it is worth noting that the graphics and music here are much inferior to later games of this kind.
‹
›
Home
View web version