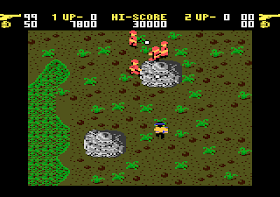 Genre: Action
Perspective: Top-down
Gameplay: Arcade, Shooter
Published by: Atari Corporation
Developed by: SNK Corporation
Released: 1990
Platform: Atari 7800
You are an expert in an elite battle group, Ikari Warriors. Together with your friend, you have been in the rear of the enemy for two weeks already. You are tired, but attention has not been dulled, and the desire to survive has only increased. Your main weapon is an automatic weapon, grenades and professional skill. Capturing a tank can significantly increase your chances of survival.
Endless rugged jungle, enemy fortifications, swarming with all the toothy muck of the river, a short rest in the ruins of buildings and again into battle! The game is nowhere mentioned, but the fighter is very similar ... Rambo!
Atari 7800: Comparing Ikari Warriors with the version for NES, the following differences can be noted. The 7800 has better control and gameplay, and the NES game looks nicer and the animation is better.
‹
›
Home
View web version