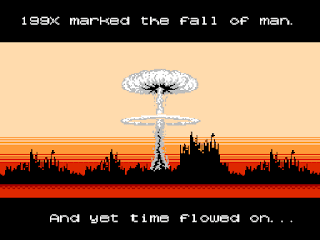 Genre: Role-Playing (RPG)
Perspective: 1st-person, Top-down
Pacing: Turn-based
Setting: Cyberpunk / dark sci-fi
Published by: Namco Limited
Developed by: Atlus Co.
Released: 1990
Platforms: Nintendo (NES), Super Nintendo (SNES)
The gameplay is almost identical to its predecessor, however, with the addition of new mechanics that are characteristic of subsequent games: an open world in which there are many cities connected by terminals, a change in human partners, the presence of several endings, the number of enemies, status, and other familiar characters also appear in the game. The story has moved on a lot, there are a lot of NPCs who say more than an incomprehensible clue to finding a quest item, factions have appeared, the plot has become much more complex and deeper, and many of its elements have been reused in the future, and this is where Order and Chaos come in, albeit still unformed as full-fledged worldviews.

The year 2036, mankind has experienced the Great Cataclysm, which destroyed most of the population of the Earth. People live in bunkers, fleeing the horrors of the post-nuclear wasteland. This is how the main characters live, two young men play the game "Devil Buster" in Keihin Shelter No. 3. Suddenly, during the game, they are contacted by a creature named Pazuzu. It says that it is the messenger of God, and calls the heroes messiahs. Pazuzu announces that the purpose of their mission is to save the outside world from the demon Bael, who subdued him, and people suffer under his yoke. Soon, demons enter the shelter: hordes of the dead, led by the necromancer Nebiros. Pazuzu gives the protagonist a demon-summoning program that he can use to communicate with them and use in combat.
After defeating Nebiros, the heroes leave the shelter, and find themselves in a post-apocalyptic wasteland affected by nuclear war and a flood. They find many human settlements where they meet two mystical organizations: the Messiah and the Cult of Deva. The former are Abrahamic religious fanatics, waiting for the coming of a messiah to save them, and are surprised to learn that the main characters have called themselves the messiahs. The second group of people are demon worshipers who do not want to change the state of affairs.
The heroes soon come across a witch residing in the tower that Pazuzu warned them about earlier. However, the witch turns out to be a kind sorceress who reveals Pazuzu's true nature - he is just a demon lord vying with Bael for dominance over the wastelands. The protagonist's friend does not believe her, says that one should not fall for her tricks, and refuses to betray Pazuzu. He leaves to continue his mission alone. The protagonist and his new girlfriend are now obliged to defeat both Pazuzu and Baal, and restore peace to the human race.