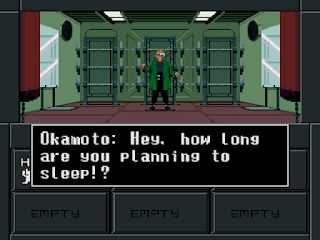 Genre: Role-Playing (RPG)
Perspective: 1st-person
Pacing: Turn-based
Setting: Cyberpunk / dark sci-fi, Post-apocalyptic
Published by: Atlus Co.
Developed by: Atlus Co.
Released: 1994
Platforms: Super Nintendo (SNES), Nintendo (NES)
This is a direct sequel to the first part of Shin Megami Tensei, which will now tell us about the events in Tokyo after the incident.

We recall: at the end of the first Shin Megami Tensei, our protagonist decides to create a world in which Chaos and Order will peacefully coexist on an equal footing, and people will be given the opportunity to freely choose between them. 50 years after the events of the first part, as a result of the disaster, it became impossible to breathe the surrounding air, and the whole world turned into an uninhabited wasteland full of filth. The people of the Messian faith had to build a special hermetically sealed city in which they could live peacefully and calmly - a city called Tokyo Millennium.
All believers are waiting for the coming of the messiah, who will save not only humanity, but the planet itself; will create a paradise on Earth called "Thousand Year Kingdom". But the whole trouble lies in the fact that not everyone will be allowed to live in such a world: only the elect, worthy of such a fate, will be able to enjoy a carefree life. And what choice will the messiah make: will he decide to submit to fate and fulfill what is destined for him by fate, or will he be able to find another path more acceptable to humanity?

The protagonist of our game, who really does not remember anything about his past and who he is. The only vivid memory of the past is saving the boy from the demons. He is grateful for this Okamoto. This brave warrior, who gave the nickname Hawk to the boy, is a resident of the Vallhala district of Tokyo Millennium.
It was he who taught the inexperienced young man a lot, making him a good gladiator.

A citizen of Tokyo Millennium Central District who is also a member of the Temple Knights. Her fate is closely connected with the fate of the protagonist: it is not for nothing that she also does not really remember anything from her past.
Given that she is in the order of the most powerful and revered warriors under the auspices of the state, she behaves accordingly. Despite this, in fact, the girl is quite merciful and good-natured.

Also, like Hiroko, she is a citizen of the central district of the city and a member of the Temple Knights. Was assigned as a partner for our protagonist, based on the assumption that she is the perfect candidate for this.
Much to our dismay, soon the cooperation of these two characters will come to an end and bad luck will force them to choose completely different paths. Despite this, Beth fully and completely trusts our main character and is grateful to him.

Another person who is a member of the Temple Knights, only he has a higher position compared to the girls: Zayin officer. And all thanks to his maniacal faith in the dogmas of the order and extraordinary devotion to the highest leadership: he is ready to kill anyone who violates the laws of the order without remorse and a shadow of doubt.
One way or another, the boy will have to slightly reduce his ardor and get rid of the fanaticism that blinds. After all, in fact, the order is far from a holy place ...

A rather ambitious young man who spreads very flattering, but false rumors that he is the messiah. But in fact, his role is the opposite: he is an anti-messiah who must constantly put spokes in the wheels of our protagonist.
And so it turns out that he is constantly in conflict with Aleph and accuses him of lying. The character is rather slippery and nasty.

I don’t want to meticulously explain the entire gameplay that awaits the player, since the game is a sequel to the first Shin Megami Tensei, and in many ways it has similar gameplay and mechanics. I will confine myself to the most basic postulates and a list of innovations.
The whole gameplay is not much different from any other dungeon crawler: a huge number of intricate mazes of the same type with a bunch of moves, secret treasures, puzzles and enemies. Throughout the game, you will be forced to scurry through such locations with a first-person view, occasionally switching to a city map, where a completely different perspective awaits you: a third-person view. Everything here is similar to the first Shin Megami Tensei. This time, however, you can navigate the mini-map, which makes it a little easier to explore locations. And so get ready for endless fights with demons, dialogues with them, synthesizing (by the way, now the game has a “magic inheritance” system, thanks to which even weak demons can learn quite powerful spells) and buying things.
In the second part, a casino appeared, where you can either spend all your money for nothing, or luck will smile at you and you will win a huge amount of chips that can be exchanged for unique things.
You will again expect random turn-based battles. And again, the merciless RNG will mock you and often force you to fight demons. A distinctive feature of the second part is that now you can fight against two types of demons in battle (instead of one, as it was before). Pretty bright prospect, isn't it? So now you need to pay even more attention to what kind of minions you carry with you and what equipment you are wearing. The game has a front row and a back row, which only affect the amount of damage dealt and received (so you can safely swing your sword in the back row - no problem).
And so get ready for the standard set that any sequel should have: new things, equipment, demons, spells; slightly improved visuals and friendlier controls.
‹
›
Home
View web version