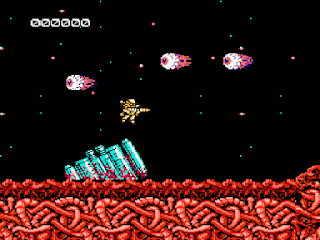 Genre: Action
Perspective: Side view, Top-down
Visual: 2D scrolling
Gameplay: Shooter
Setting: Sci-fi / futuristic
Published by: Milton Bradley Co.
Developed by: Dynamic Planning, ITL Co, Natsume Co.
Released: 1989
Platform: Nintendo (NES)
Lieutenant Nazal, the last survivor of The World Alive Force, has challenged the massive alien organism Parasitis, which has completely swallowed the planet Abadox. Enlisting a simple but well-aimed motto "small, but daring", he went to the inner, in the truest sense of the word, the world of a giant creature, where he will have to meet face to face with all the hostile flora and fauna of the monster, as well as to study in great detail anatomy of extraterrestrial intelligence. The latter is of little interest, since numerous enemies do not allow you to enjoy the disgusting, and, at the same time, bewitching backdrops.
"Abadox: The Deadly Inner War" is built according to an interesting scheme, it changes the orientation of scroll shooting: first, shooting is carried out in the direction from left to right using horizontal scrolling, and then from top to bottom using vertical scrolling. This changes not only the direction of shooting, but also the appearance of the player, enemies and bonuses.
A couple of words about bonuses: they are contained in blue enemies. With their help, the strength and the number of simultaneous shots from weapons are pumped, the number of shields (in the form of balls circling around the lieutenant), several hit points are added instead of the initial one.
‹
›
Home
View web version