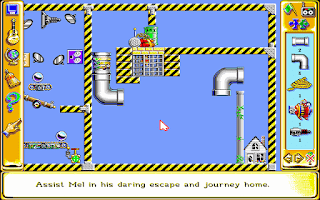 Genre: Puzzle
Perspective: Side view
Gameplay: Paddle / Pong
Published by: Sierra On-Line
Developed by: Jeff Tunnell Productions
Released: 1994
Platform: DOS
The second part of the series of games The Incredible Machine. There are even more tools at hand, their use has become even more diverse. The graphics are a little more pleasant.
The game includes three modes: puzzle, free simulation and two-player games.
There are more levels in the puzzle, from the simplest, where you need to throw the ball up, to the most difficult, in which you need to arrange objects in the correct order in order to solve it. The most difficult levels are two puzzles, in one of which you need to place the lasers in the right direction, and in the other - throw all the billiard balls into the hole, while calculating the trajectory correctly. Not only a child, but not even every adult can cope with these levels.
In the free simulation mode, you can create a puzzle for every taste, and at the same time program the circumstances under which, in fact, it will be solved.
Another mode is a game for two. Here is a competition between Professor Tim and ... a cat. This is a direct reference to Chistyakov's song "The Man and the Cat", only here it was not the brain that brought the man together, but his heart - because he could not solve the puzzle and lost to the cat. The winner is the one who, in fact, solved it.
Let's talk about the characters. Yes, it may seem silly that the puzzle, and even more so The Incredible Machine, has a protagonist - but he is. This is Mel Schlemming, a boy in a red sweater and yellow pants. And this is not Dunno, as you might think - this is just a boy who, in some puzzles, needs to either help get home, or use him as an object to solve a particular problem: for example, put on a detonator to detonate a bomb. Also, this character screams when there is nothing under him or when he is thrown up. I wonder if he has parents? If so, then they probably complained to the police or turned to an organization to combat child exploitation. However, this is already nit-picking.
And, of course, where do you go without a cat and mouse. This is almost the main part of The Incredible Machine series, they even created a separate game about them - Sid & Al's Incredible Toon Machine.
To summarize, I want to say that this is one of the best parts of The Incredible Machine series - in terms of graphics, level design, puzzles and so on. And, of course, the music made me happy. You won't be bored.
The game turned out to be so all-consuming that it will surely bring a lot of joy to both children and adults.
‹
›
Home
View web version