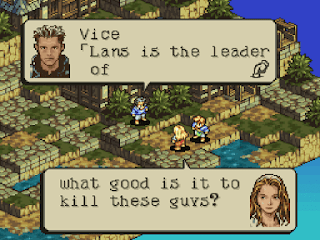 Genre: Role-Playing (RPG), Strategy / tactics
Perspective: Bird's-eye view
Visual: Isometric
Art: Anime / manga
Pacing: Turn-based
Setting: Fantasy
Published by: Quest Corporation
Developed by: Quest Corporation
Released: 1995
Platforms: Super Nintendo (SNES), PlayStation (PSX, PS1)
Tactics Ogre: Let Us Cling Together is one of the brightest representatives of tjRPG and still remains one of the best games of its genre and an example for all other similar games. We are provided with both classic RPG elements and innovations from the authorship of Yasumi Matsuno and his talented team of game developers, who have gathered under the banner of Quest. Saying the game is good is like saying nothing. The whole depth of the gameplay and diversity can be understood only by playing it. But I will give a short list of the main elements in the game:
The tactical component is not the only forte of the game. A wonderful screenwriter and game designer Yasumi Matsuno presented a dark atmosphere of the Middle Ages and a plot with political intrigues, the ups and downs of the hero, a detailed biography of each character encountered. During the game, you will choose your own destiny. For example, you can kill civilians and blame it all on the radicals who were killed by the team in battle. In this case, our hero will become good in the eyes of the public and receive gratitude from the ruler. Or you can refuse to kill the innocent, but you have to fight off the royal troops, and the ruler himself will not forget to denigrate you in the eyes of the public. This is the choice of the storyline by the player. Are you intrigued yet? Then just listen to the wonderful music composed by Hitoshi Sakimoto and Masaharu Iwata (who later collaborated with Matsuno on Final Fantasy XII). The game will be a great pleasure for both old-school fans of the Ogre Battle series and newcomers who have a desire to try Matsuno's games. I promise you, you won't be disappointed.
The main character of the game is named Denam Powell. Denam is an ordinary guy who lives in the coastal village of Golyat with his sister Catiua and friend Vyce. One day, a detachment of dark knights led by Lancelot attacked their village. Vyce's parents were killed, and Denam and Catiua's father was taken away and taken away in an unknown direction. A lot of time passed and it seemed that normal life was just beginning to improve, but Lancelot came to the village again. This time, their destinies will be closely intertwined, and life will never become so ordinary. And only you can help the wheel of fortune make a new turn...
‹
›
Home
View web version