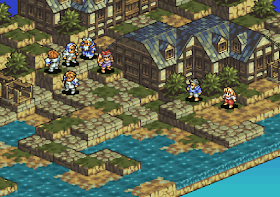 Genre: Role-Playing (RPG), Strategy / Tactics
Perspective: Bird's-eye view
Visual: Isometric
Art: Anime / Manga
Pacing: Turn-based
Setting: Fantasy
Published by: Atlus Software Inc.
Developed by: Quest Corporation
Released: 1998
Platforms: PlayStation (PSX, PS1), Super Nintendo (SNES)
In addition to a very dense history in the world Valeria, which in addition to the extensive and not completely linear main story offers many side quests and alternative ways, the game is characterized by a highly detailed for SNES conditions graphics with medieval European flair. The profession system, which offers over two dozen alternatives here, relies on prerequisites in the character traits (warriors must be strong, magicians must be intelligent, and so on), and offers a lot of flexibility.
The combat presentation (and also the cutscenes) take place in an isometric 3D environment in which the individual figures of the group move round and thus, in addition to the direct confrontation, introduce a tactical component into the game (comparable to the previously used top-down game). Optics in games such as Shining Force or Fire Emblem), because in addition to the relative positioning to each other and the different height levels have effects in the game. In addition to character development, micromanagement of equipment and spells is a big part of this type of game.

The land Palatinus is inhabited by a people called 'Auric'. After a few years, however, another people invaded the heartland of Palatinus. The people from the west called themselves 'Indigon'. They had experienced war, defeated the Aurics and pushed them into the barren mountains to the east. But then a man appeared, later known only as the 'Progenitor' (Latin and English progenitor). With godlike power he flung lightning and mountains against his enemies and subdued them. He united both peoples and founded the kingdom Palatinus. The descendants of the Progenitor have since made the king.
‹
›
Home
View web version