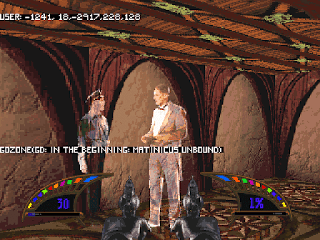 Genre: Action, FPS
Perspective: 1st-person
Gameplay: Shooter
Narrative: Detective / mystery, Horror
Published by: Acclaim
Developed by: Torus Games
Released: 1997
Platforms: PlayStation (PSX, PS1), 3DO Interactive Multiplayer
Pre-release prototype of the eponymous first-person adventure horror shooter, also released on 3DO (there is also a version for PC, but there it is a completely different product). The game was completely finished and ready for release, but in 1997, for unknown reasons, was canceled by the publisher Acclaim, the finished copies of the media were recalled and destroyed. In 2020, a pre-release version of the game was discovered - a prototype from April 1997. The version is untested, contains a considerable number of errors and menu debug, but it is completely passable (albeit with some difficulties).
‹
›
Home
View web version