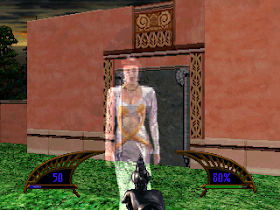 L / R - side steps; A - the use of weapons;
A + B - weapon change;
B + Up - raise your head (change the viewing angle);
В + Down - lower the head (change the viewing angle);
In + ⇦ / ⇨ turn around "around" (180 degrees);
B + L / R - turns on and off the "status" in the lower part of the screen. Left - the number of charges for the selected weapon, to the right - how many percent of 1 life you have left;
B + C - the choice of the mode of using crystals, winged vessels that give magical power. In the window that appears, a description of the vessel's capabilities is given. The choice is A, P. The intensity of the crystal flashing indicates the exhaustion of its resource.
P - call the card with the name of the level and
percent of the investigated area of ​​the level. Changing the scale of the map - C / B;
X - call the service menu. The top line preserves the game, the second one loads the previously saved one.

Information on the screen

In the right wing - the level of vitality. Free places in the wing are filled with crystals (when you pick up winged vessels).
In the left wing - the number of cartridges to the selected weapon, the weapon indicator. The key crystals, located on the empty seats in the left wing, open the doors to the next stage.
When using a powerful weapon, be careful about the walls and next to strong opponents: can ricochet.

Replenish vital energy white, purple and green balls. Reds take from 5 to 20 percent of life. Ducks can add energy, but some take it away. Look for winged vessels.
In Conway's estate, all the ghosts are talking. They try to help you with advice. Listen carefully to all conversations.
Light is best not to include. Enemies in the dark, it turns out, more noticeable. Do not forget about your rear. After all, the enemy can sneak up from either side. During the fight, move more. This will help you avoid dangerous injuries. However, pressing the buttons that provide your movement, while the game loads the image of a new section of the mansion, can spoil the saveings. Do not rush to press the joystick until an image is formed on the screen.
The game can be completed without collecting all the keys. At different difficulty levels, the keys are hidden in different places. Our description focuses on minimum complexity. The location of individual parts of the game space is seen in the schematic drawing showing how the sections are connected. The numbers of the sections on the diagram correspond to the sequence numbers of the stages in our description. Stages are listed in alphabetical order, and their numbers do not correspond to the order of passage.

The project is actually excellent, and it's hard to find a person familiar with 3DO who at least once did not hear anything about Killing Time. That is, everyone has heard of her, everyone knows her and yet the plot. As you know, Ancient Egypt - a place simply stuffed with secrets and accursed artifacts (not a pair of my old VCR), because the Egyptians themselves were turned on the cult of death and the afterlife. Maybe not so turned as we say the Maya tribe, but yes, with those comrades, the Egyptians, for geographical and historical reasons, never met. Those who wish can fantasize about who is steeper, but one way or the other, the modern man is reasonable, greedy for profit, power, immortality, and eternal youth. It was he who protruded the path to where even the non-ancient Egyptians were afraid to meddle and took away all the most damned Egyptian things, pushed them through museums and private collections. It is one of these things that turns out to be in the center of the plot of the game. Specifically, there were water clocks (well, or water ones) that could not only mediocrely count the time interval, but also manage this time, but not in terms of the time machine, but rather creating perturbations of the time continuum, which in principle to a sensible person is still incomprehensible.
Residents of one of the very large estates - people very rich and spoiled, somehow, did not read the instructions to the clock and disappeared. You, in all this history, are pursuing (at least initially) only your own goals, and therefore you are arming yourself and going to that very estate. Armed with something, but you start with a revolver. Later, when you have two, you can shoot at once with two hands, and then arm yourself with a flamethrower, a rifle, a gun and all that other in the spirit of the 1920s. But still, weapons are not the most important thing, the main feature is skills. Collecting artifacts you get this or that skill that can be used at the right time. Among the skills there is, for example, invisibility, or, on the contrary, the ability to see the enemies on the map or there the secrets of the levels. But the card is already from the very beginning without any skills. Moreover, here there is no division into levels (in contrast to Wolfenstein 3D) and the whole world is divided into very extensive locations, the degree of study of which is calculated in percent. That's thanks to the map you can always find out on what location you are, to follow the degree of its study and the place of your own finding. Conveniently.
And, what's uncomfortable? There are such things. For all its beauty, the game slightly slows down (to DOOM, however, very far). This can be tolerated in narrow halls and small corridors, but apart from them there are really huge rooms here, but it's much harder to take aim there. And you can look not only left-right, but up and down. This possibility rather hinders rather than helps. On the other hand, the dullness of enemy intelligence is annoying. The degree of its vigilance depends on the type of monster, but here its accuracy, it is almost always flawless, especially when the enemy has a firearm in his hands (as, for example, right at the beginning) or magical. It is easier to deal with weapons throwing, but still the ability to avoid damage is very small, that is, the PO'ed with its frills does not pull. Another unpleasant moment is that the enemy begins to react to you before he sees. It will be stubborn to shoot through walls or even these very walls to sting in the case of huge bees. The effect of surprise is almost completely absent, and the complexity accordingly increases. There are three difficulty modes here, but do not think that by playing Easy you are already a champion. Most likely you will be killed very quickly or you will get lost in huge, sometimes high-rise, labyrinths, with magical traps, failures, doors to which you still need to find the key and everyone of that kind.
But the music in Killing Time is beautiful. Unlike Escape from Monster Manor, it's really scary to play here, thanks in large part to music and zukam. Again, the schedule is pleasant, well, all kinds of surprises. Sometimes, ghosts come out of the wall and play some sketch (these are video clips), sometimes, you can practice shooting on non-player characters. The fact is that in the world there are not only monsters, but also creatures directly say useless. They are also monsters, but there is no harm from them. Killing them (and any other creature supposedly possessing the rudiments / remnants of the soul), you can get such energy balls. Reds take away health, and white (or there blue) restore. You will certainly need health. Monsters are many, play long and hard, another thing is that the task greatly simplifies the Internet.
‹
›
Home
View web version