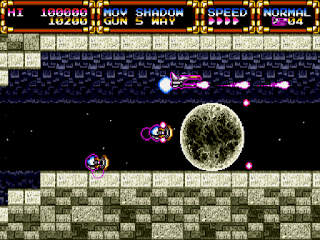 Genre: Action
Perspective: Side view
Art: Anime / manga
Gameplay: Arcade, Shooter
Interface: Flight / aviation
Setting: Sci-fi / futuristic
Published by: Samsung Electronics Co.
Developed by: NCS Corporation
Released: 1992
Platform: SEGA Genesis / Mega Drive
It's 2025. A war breaks out between people and an incomprehensible race of aliens. In the midst of the battle, Federation Navy's ship Ken was teleported along with him to an unknown destination. Upon learning of this, his sixteen-year-old daughter Lucia kidnaps the prototype fighter CSH-01-XA "Gleylancer" and is assisted by her friend Teim. Lucia sets out to find her father.
If you do not take into account the plot, then this is a completely standard scrolling shooter, of course, with its own implementations. There are eleven levels in the game and at the end of almost each of them a boss is waiting for you. Quite an interesting and high-quality game, I recommend it to fans of the scrolling shooter genre.
‹
›
Home
View web version