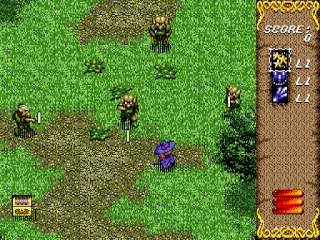 Genre: Action
Perspective: Top-down
Art: Anime / manga
Gameplay: Arcade, Shooter
Setting: Fantasy
Published by: Toyo Recording Co.
Developed by: Wonder Amusement Studio
Released: 1992
Platform: SEGA Genesis / Mega Drive
A wonderful game about a witch, magic and magic stones. As you understand, you play a little sorceress, that is, a young witch. She has a difficult path ahead of her. Killing a variety of enemies along the way, bats, trolls, goblins, orcs, etc. by magic. It can be improved by picking up various bonuses knocked out of chests. The game is done quite nicely, and well, so it's pleasant enough to play it. In addition to the main magic, you also have super magic that should be used when the going gets tough. The game is in Japanese, but the essential phrases are written in English. So that difficulties during the game should not arise.
‹
›
Home
View web version