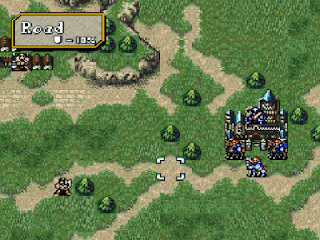 Genre: Role-Playing (RPG), Strategy / tactics
Perspective: Top-down
Art: Anime / manga
Pacing: Turn-based
Setting: Fantasy
Published by: Nintendo Co.
Developed by: Intelligent Systems Co.
Released: 1996
Platform: Super Nintendo (SNES)
The game is unique in many ways, sometimes very difficult, sometimes very exciting. Here you can control up to 30 units. You can accept new characters into the army, basically just talking to them. Sometimes the game forces you to perform insanely difficult tasks, such as destroying all the enemy's elite forces without touching the commander. The main mechanic is to fight effectively and win. This is a tactical game. During the battles, your characters can talk to each other. The goal of each card in most cases is to capture the enemy's main castle. At first glance, this may seem like a simple matter, but not everything is so simple. Sometimes the game requires a lot of patience. This part has interesting weapons compared to other games in the Fire Emblem series. And it is a must-have for any true strategist or tactician. Considered by many to be the best version of the entire series and a serious candidate for the best games of all time, along with the Final Fantasy or Zelda series. The graphics for the Super Famicom look great. The images of the characters on the map look different and leave no doubt who is who. The fight scenes look realistic. Characters attack and each weapon has its own image, which is rare for Fire Emblem. The faces of the characters do not look alike, except for the villagers when you save your achievements. The backgrounds are worked out to the smallest detail, which leaves no doubt about the high quality of the toy. The music is made in such a way as to emphasize each climax of the episode taking place in battles. For example, when someone dies, the tones change to a sad tune. When you are about to conquer the castle, the music changes to a victory march. In this regard, everything is done incomparably. The sound effects are good, but not outstanding. The storyline consists of adult themes such as allusions to all sorts of deaths and other tragedies, as well as references to inbreeding, incest and rape. So it's not surprising that the game was only released in Japanese. The plot is twisted robustly and sometimes sad that the game is not in Russian. Fire Emblem 4 has 11 chapters and a prologue. Each chapter includes a map with several castles that you must capture. You will have to command a large number of troops at a time. Each character has their own money, which adds to the thought of the game. You can exchange money with other characters if they are in love. This is just an incomparable distinctive innovation of this part. If the characters spend a lot of time on the field of never-ending battles, then over time, this sublime feeling arises between them, from which even children can appear. Lovers also have a high chance of landing a critical hit when next to each other. The appearance of children is also not in vain, since the game also has a generation system. If the characters have a baby in the first half of the game, you will have the opportunity to play as them in another generation of characters, while the ones who raised the babies will have statistics far superior to their parents. This game is a must if you are a fan of the strategy and RPG genre.
‹
›
Home
View web version