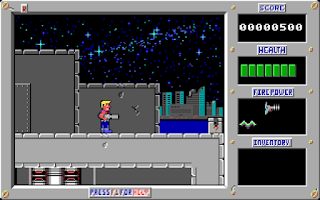 Genre: Action
Perspective: Side view
Gameplay: Arcade, Platform, Shooter
Setting: Sci-fi / futuristic
Published by: PC-SIG
Developed by: Apogee Software
Released: 1991
Platforms: DOS, Game Boy Color (GBC)
The game takes place in the near future, in a post-apocalyptic world. The mad scientist Dr. Proton decides to take over the world with his army of techbots. Duke Nukem is hired by the CIA to deal with a scientist. The first episode takes place in a devastated city. In Episode 2, Duke Nukem follows Dr. Proton to his secret base on the moon. In the third, Dr. Proton flees into the future, and Duke chases him through time.

The gameplay as a whole is quite simple - to complete a level you just need to find a way to the next one. The levels are quite large in all directions, so it's not enough to just "run right". From time to time, it is necessary to interact with the environment, for example, collecting keys to open doors or destroying electrical generators to disable barriers. In general, the game is a rather common "labyrinth" platformer for shareware games of the early 1990s. Despite the fact that the protagonist almost always has a weapon, Duke Nukem is not a shooting or gunfighting game.
At the same time, the game is characterized by elaboration of details. For example, the game has an item "turkey leg" that restores health. However, if you shoot at him, he will become "cooked", and in this form will restore more health. Coke cans can be shot, and then they become weapons and cause damage to enemies, or collect them, and then the player is awarded additional points. When they explode, rockets destroy part of the level, and trap boxes cover the surface of the platform with fire. If you pick up an item such as a claw or a shoe, Duke will be able to use a new skill. Other items can be found in the boxes scattered across the levels.
The game has "secret bonuses" intended for more experienced players. To receive these bonuses, special goals are provided, for example, not to receive damage, shoot all cameras or signs with the inscription ACME, collect letters scattered around the level in the correct order, making up the word DUKE, etc. The only reward for taking the bonus is the accrual of additional points, which generally useless: the player can save the game and exit the game, after which he will be prompted to enter his name in the table of maximum points. By repeating this procedure several times, you can fill the entire table with your name.
In this game, unlike the subsequent ones in the series, the main character does not represent the type of macho and connoisseur of beer full of testosterone. On the contrary, he is not inclined to show his masculinity and impose his tastes, he does not swear or smoke. He shoots robots, eats turkey and drinks cola, and when he dies, he explodes into confetti. In dialogues, his lines are generally simple and relate to the current task, with one exception - the subtext in the phrase after defeating Doctor Proton, when Duke returns home to his woman Oprah.
‹
›
Home
View web version