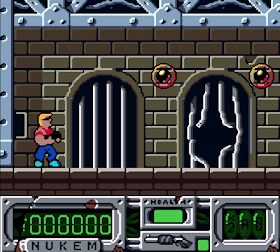 Genre: Action
Perspective: Side view
Visual: 2D scrolling
Gameplay: Arcade, Platform, Shooter
Setting: Sci-fi / futuristic
Published by: GT Interactive Software Corp.
Developed by: Torus Games Pty.
Released: 1999
Platforms: Game Boy Color (GBC), DOS
After defeating Dr. Proton, Duke Nukem bathes in glory, gives endless interviews and owns his own line of souvenirs. During one of these interviews, he is abducted by aliens of the Rigelatins race, they want to use Duke's brain to organize an attack on Earth. However, he manages to escape and begin his struggle for the liberation of the Earth from aliens.

The gameplay has changed little relative to the first game of the series. Similarly, the player examines the level, shoots at different objects, collects objects (some of them will be needed in the future) and looks for a way out of the level. Depending on whether a special condition is fulfilled or not, at the end of the level a bonus may be provided, of which there are only seven. At the end of every eighth level there is a fight with the boss. If in the first game Dr. Proton acted just like any other enemy, then in Duke Nukem II the bosses had their own patterns of behavior, however, despite this, they are not serious obstacles. An innovation in the gameplay is the need to destroy Duke tracking satellites, without destroying which Duke cannot complete level. New types of weapons were added to the game, and the parameters of the old one were changed. However, the ability to switch to the previous weapon is not provided, because of which it is impossible to save the charges of more powerful weapons. Also, Duke is now able to move crawling, shoot up, use stairs. The gameplay as a whole is slightly faster than in the previous game. The game also presents a choice of three difficulty levels.
Level design has changed. Levels in general have become a bit larger and more diverse than in the first game of the series. In one of the levels where the action takes place in the city that suffered from the earthquake, as Duke moves up the level, the ruins of the buildings collapse, freeing up the path for the hero. Also in the game there are completely original levels, for example, when Duke flies on a ship and can move freely, or when Duke breaks through enemy forces, clearing his way by shooting with a laser gun. However, the game still has levels of the type of nondescript mazes.
The graphics in the game use more colors. The variety of graphic tiles is increased, due to which the levels look more unique. However, many levels are still boring mazes that make it easy to get lost. Sprites are slightly increased, which, in the case of finding enemies of the visibility zone, can disorient. A radar has been added to the game interface to help the player in such situations, but it is useless since it does not show all the necessary information.
The image of the protagonist was also changed. Duke Nukem in this game is not yet fully consistent with his image from Duke Nukem 3D, but is already approaching it. Duke is wearing a red T-shirt, but still does not wear sunglasses. He is quite talkative in cutscenes between episodes, but his speech is not as rude as the machisms in Duke Nukem 3D.
In general, the gameplay of Duke Nukem II is not made any major innovations, the main changes relate to improvements to the original concept.
‹
›
Home
View web version