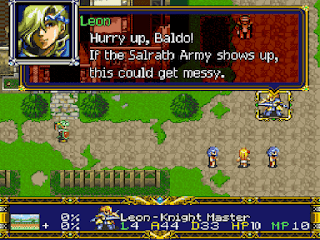 Genre: Role-Playing (RPG), Strategy / tactics
Perspective: Top-down
Art: Anime / manga
Pacing: Turn-based
Setting: Fantasy
Published by: Masaya
Developed by: Crosstalk Inc., NCS Corporation
Released: 1995
Platform: Super Nintendo (SNES)
Popular in its time tactical series Langrisser. This implementation is an improved and supplemented version of the game Langrisser II, released on the Sega Genesis / MegaDrive in 1994. This game is superior to its predecessor in almost every way. You get at your disposal several generals, which are extremely important in the storyline and history of the game. Once they reach level 10, they have the option to choose a class for them. Depending on the class, the character will receive new types of attacks, magic spells, etc. - everything that he uses during the battle. Each character has many possible class options. The character art is excellent. Maps are worked out much better than in the Genesis version. Music and other sound effects are also in order. Since the game has several endings, it is a pleasure to play through it several times. There will be an opportunity to look from a new point of view on the entire history of the game and its plot. You can take care of a better future for your friends and allies, or you can just kill them, one by one. If you like games that require thinking, then Der Langrisser is definitely for you. It delivers a very compelling storytelling that turns into a great time.
‹
›
Home
View web version