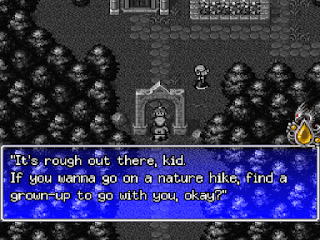 Genre: Role-Playing (RPG)
Visual: Isometric
Pacing: Turn-based
Gameplay: Japanese-style RPG (JRPG)
Setting: Fantasy
Published by: Capcom Entertainment
Developed by: Capcom Co.
Released: 1995
Platforms: Super Nintendo (SNES), Game Boy Advance (GBA)
A great continuation of the RPG from Capcom, a company that has worthily tried its hand at this genre. A little boy with the ability to transform into a dragon goes in search of his lost sister and gets into a big adventure. A simple youngster who grew up in a small village must plunge into a difficult adventure. You again have to rid the settlements of the evil hanging over them. The world is full of mysteries about dragons. Legends hide a small fraction of the truth behind them. One of them the hero will have to know. Graphic implementation has become much better. The sound effects also look great compared to the first part. The action has not changed much, you have to visit various cities, talk with passers-by, buy equipment, etc. In general, everything that is familiar to us from many other RPGs on the Super Nintendo. A single player game for all fans of role-playing games and projects from Capcom.
‹
›
Home
View web version