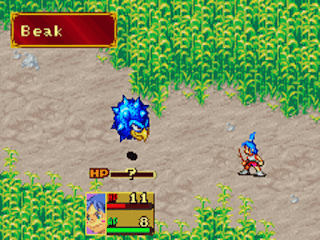 Ryu Bateson begins the game as a little boy, the son of a priest in the town of Gates. When his sister Yua Bateson goes missing, Ryu's father, priest Ganer Bateson, asks him to pick her up before she gets into trouble. Ryu's search eventually leads him to the wilderness outside the city, where he finds Yua standing near the head of a sleeping dragon. Ryu follows Yua's advice and falls asleep under the dragon. When he wakes up, his family is gone and no one in the city recognizes him. Later that night, a young orphan named Bow decides to rob the church. Finding nothing of interest, he invites Ryu to accompany him on his way to another city. On the way to another city, an unexpected downpour begins and Bow offers to wait it out in a cave, but in the cave they are attacked by a monster named Barubary.
10 years pass. Ryu and Bow live in HomeTown and carry out various assignments for the City Elder. After the Magic hood is stolen from a wealthy man's house, Bowe is falsely accused of theft and forced to flee. Hidden, Bow is forced to leave Ryu for a while until he finds the real thief.