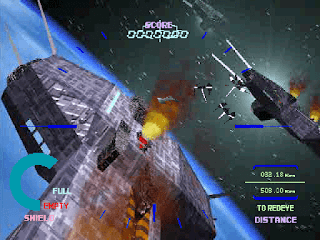 Genre: Action
Perspective: 1st-person
Gameplay: Rail shooter
Setting: Sci-fi / futuristic
Published by: Namco Limited
Developed by: Namco Limited
Released: 1995
Platforms: PlayStation (PSX, PS1), 3DO Interactive Multiplayer
Sitting in the gunner position of a "GeoSword" fightercraft, you must shoot your way through the enemy armada and bring the fight to their base planet, Redeye. Altogether you'll have around 10 missions to get through before the galaxy is safe and your wingmen will help you along the way. And during those missions, you'll be expected to shoot out the sides of huge enemy battlecruisers, travel inside of enemy carriers and travel through the canyons of Redeye to deliver your payload.
The PlayStation and the 3DO versions offer the choice between an arcade mode and an enhanced mode. In the enhanced modes that flat polygons are remade in fully textured polygons and the black bars on the sides have been removed to turn the image into a fullscreen view.