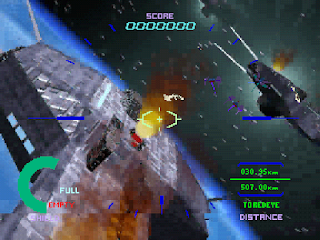 Genre: Action
Perspective: 1st-person
Gameplay: Rail Shooter
Setting: Sci-Fi / Futuristic
Published by: Panasonic Software Company
Developed by: Namco Limited
Released: 1994
Platformы: 3DO Interactive Multiplayer, PlayStation (PSX, PS1)
StarBlade is a space arcade shooter in which you only have to move your crosshair across the screen and burn enemies with a laser. All navigation of the ship has already been determined by the developers, and you only need to enjoy the flight, admiring the views of open space. Such games can be seen more often in the halls of slot machines than on consoles, although there are also enough of them among the games for 3DO and StarBlade is one of the best. By the way, the game is a port, and its first version was released in 1991 on an arcade machine.
The game has two graphics modes - with textures and, accordingly, without them. In both modes, what is happening looks equally good and the choice does not affect the frame rate either, but it does affect the difficulty level - the improved mode has a higher pace of the game.
The battlefield is replete with a pretty decent variety of acceptably detailed combat vehicles with a variety of weapons on board, and the surroundings with explosions, smoke, and similar war pleasures.
Of the sounds, only explosions, shots, and chatter on the radio, there is no music at all, and how good the orchestra sounded ... Although the absence of musical accompaniment gives the picture of what is happening a more severe combat atmosphere - you sit yourself in a sealed cabin and are not distracted by anything except enemy fighters ...
In general, it is a wonderful arcade toy that requires minimal gray matter activity, a refined reaction and a calloused thumb on the right hand. Highly recommend it to Wing Commander fans for a light warm-up before a serious flight.