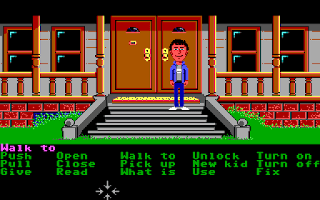 Enable mouse - SHIFT+M
Genre: Adventure
Perspective: Side view
Visual: 2D scrolling
Gameplay: Graphic adventure, Puzzle elements
Interface: Point and select
Narrative: Comedy
Published by: Lucasfilm Games LLC
Developed by: Lucasfilm Games LLC
Released: 1988
Platforms: DOS, Nintendo (NES)
The first quest from LucasArts (then still LucasFilm Games). The founder of the genre. Milestone. And also a film of category "B", a TV series of dubious quality and a bunch of remakes.
So, in the American hinterland, a meteorite falls. It would seem that the event is quite ordinary for the American hinterland - but it was not so! He falls very comfortably - right next to the home of the ancestral Mad Scientist (tm) Dr. Fred Edison. And after many, many years, the house is overgrown with ill fame, and when its inhabitants kidnap the girlfriend of the Most Important Ringleader of the local school, he gathers a team of daredevils who want to go with him to save her from the dungeons.
We are free to choose at the beginning of the game any two partners out of the proposed six - each of them has its own characteristics and abilities, which in one way or another will affect your approach to the passage of the game. As a result, the game has several possible endings, a small bunch of alternative solutions to some moments, and, what is more fun, the current world record for the speed of its passage is about nine minutes for the PC version and seven minutes for the NES version (oh yeah, this is the only Lucas quest ported to Nintendo! With significant changes that lead to such a discrepancy).
By itself, it is revolutionary - in addition to nonlinearity and purely mouse control, it is also capable of boasting the invention of a button interface system - instead of annoying (and constant at that time) Sierra "guesses" with text input, you have a set of actions that you can try to apply to any active subject on the screen. And to check the activity of objects is quite simple - press "what is this?" and hover the cursor over the item. The active one will be highlighted!
The gameplay, scenery, humor and individual plot features are a collection of parodies and direct incarnations of horror films and various trash of the film category "B": suffice it to say that the NES edition of the game was pretty much censored, blood stains were wiped off the walls, the opportunity blow up a hamster in the microwave (try it, a gamer is worth it) and posters with half-naked girls too. And also mutant tentacles (to whom the second part of the game - Day of the Tentacle is abundantly devoted), dabbling with chainsaws, home-grown spaceships and ... well, okay, and so you have enough spoilers.
‹
›
Home
View web version