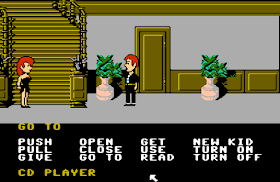 Genre: Adventure
Perspective: Side view
Visual: 2D scrolling
Gameplay: Graphic Adventure, Puzzle elements
Interface: Point and Select
Narrative: Comedy
Published by: Jaleco USA
Developed by: Lucasfilm Games LLC
Released: 1990
Platforms: Nintendo (NES), DOS
20 years ago, near a manor, a meteorite fell. Since that day, all the residents of the building have changed strangely. Nowadays, the owner of the estate, Dr. Fred (now a mad scientist), kidnapped the girlfriend of the main character (Dave) Sandy. Dave is organizing a rescue expedition consisting of him and his two friends.
Before the game starts, you must choose 2 assistants for yourself - this will depend on the passing of the game and its ending. Each friend of Dave is an expert in something and therefore can help in the situation associated with his hobby. For example, Bernard is fond of physics and can help set up the radio and fix the phone, and Wendy is a future writer and knows how to work on a typewriter. In total, 6 comrades offer their services.
Control in the game is made in the style of point'n'click. At the bottom of the screen, all possible verbs used in the game are listed, except for talk - the characters speak only when they themselves want, and look - as there is no need. You control three characters simultaneously and can switch between them. Therefore, it is always worth remembering who has what objects and when switching to another hero always leave the other two in safe places. This is due to the fact that in the game any game character is subject to death, and you can get very stuck in passing with the loss of important items that he took with him to the grave.
The gameplay will proceed as in a normal quest. You shirk around the house, along the way collecting everything that badly lies, and subsequently applying the found objects in different situations and opening access to new locations. The gameplay will also be diluted with non-game video inserts, explaining the story and revealing the emotional experiences of the characters. From these inserts you can always find out where this or that inhabitant of the house is and in case of which avoid meeting him. By the way, when meeting with the inhabitants of the mansion inside the house, be ready to be in prison, from which it is not so easy to get out. Very interesting is the fact that in the prison cell is the entrance to the secret laboratory of Dr. Fred. Also worth mentioning is that the game has several points that require you to speed up actions and / or sharing two characters.
The inventory of characters is unlimited in volume, but only 4 items are shown on the screen at a time. Some items, such as keys, can be used multiple times. But you can also find a bunch of useless things that only take up space in the inventory. For example, to get to the 3rd floor you need to feed and drink a green tentacle. The necessary food and drinks are stupidly fed to him in a row. Or if you found a typewriter, but did not get Wendy's helpers, then you simply can not use it. The game is just great music, emphasizing the comicality of the whole action. Melodies are performed with a hint of sci-fi, but too quick not to become serious. Also worth noting is that each character has its own melody. Sounded dialogues can be heard, of course, only in the sidhic PC version.
The graphics in the game are also quite nice and not very repulsive. Especially good look cutscenes. The rooms are not distinguished by an abundance of objects, but this minus has been corrected in the remake, which will be discussed below.
The game was made based on the popular television series of the same name. After a successful release in the year 87 and no less successful sequel (Maniac Mansion 2: Day of the Tentacle), German fans decided to create their own sequel. Extensions went exclusively to the PC. The first was the game series Maniac Mansion Mania consisting of more than 15 episodes. Then there was a remake of the first part, called Maniac Mansion Deluxe and made on the engine AGS (Adventure Game Studio).
‹
›
Home
View web version