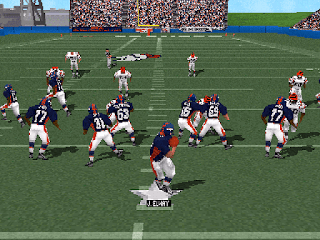 If the Start button does not work on the title screen - switch "Pad 1 Type" to Analog.
Genre: Sports
Perspective: Bird's-eye view
Visual: 2D scrolling
Sport: Football (American)
Published by: Electronic Arts
Developed by: EA Tiburon
Released: 1998
Platforms: PlayStation (PSX, PS1), Nintendo 64 (N64)
Another American football simulator from the corresponding line of EA, bearing the name of the legendary coach in this sport - John Madden. For her time and in her niche, she, perhaps, was objectively the best, although she did not receive high marks from all critics.
There are the following modes to choose from: practice; friendly match; championship (we choose a sponsored team and the total number of those in the event is 8 or 16); a season (during one such, that is, 17 weeks, we play the role of a coach of a specific team, while having the opportunity to deal with player transfers, as well as track and attract "free agents" - and as a result we strive to win the Super Bowl); "free season" (the same, but you can mix the compositions of different divisions); "franchise" (in fact, an extended version of the third mentioned mode: we train the team for 15 seasons, we have access not only to the transfer and attraction of non-club players, but also to the draft, but at the same time they must show certain results, otherwise there is risk of being fired); "magic draft" (a very strange mode, where during 48 meetings between different teams, we, directly controlling any of the pair of competitors and determining their lineups before matches, can somehow form our own "dream team", after each fight inviting athletes that showed the best results in it). There are more than enough teams to choose from, there are also "star historical" ones; the license is also fine, so the names of the players, lineups and statistics are consistent with the state of affairs in the NFL as of mid-1998. It is even possible to create your own fictional footballers, but not leagues.
Of course, there are many groups of settings designed to facilitate or, conversely, complicate what is happening on the field. In particular, there are three types of gameplay: "traditional", "arcade" (some rules are not observed, the number of orders and, accordingly, the number of control keys used has been reduced) and a "miracle" called "One button", in which all commands are ward really given with the help of one button, and what exactly this action will be will be determined by the computer; what is the meaning of this and who is interested in playing like that is a mystery. Before the start, it is also allowed to choose the duration of the periods of the match - the so-called "quarters" (in real American football they are 15 minutes, but in this game - from 1 to 10), the stadium, the time of day and weather for the meeting, the possibility or impossibility of the players fatigue or injury to them, one of three skill levels for all athletes on the field, the realistic return of passes, the frequency of punishment of football players for violations of the rules, and so on - and during the meeting, apply different tactical schemes for certain situations, the so-called ".
The latter, however, contains one of the main drawbacks of Madden NFL 99, noted by almost all reviewers of the time of its release: each of the teams has its own "playbook", that is, a list of the mentioned methods of behavior in (for example) attack and defense, and you can choose them only from the proposed options, that is, you can neither borrow someone else's, nor invent your own. Some specific settings are designed for certain modes and differ depending on the choice of such: for example, "trade deadline" - the inability to acquire new players after the 6th week of the season - exists both in the season, where it is allowed to be disabled, and in "franchise", but it is already prohibited there; in the same way, in the latter, there is no possibility of unlimitedly increasing the salary of athletes ("salary cap") - in contrast to the first mentioned, where in this way you can practically at any time attract high-class football players, claiming salaries corresponding to their talent.
Even with the choice of the "arcade" style of play and the lowest level of difficulty (which, by the way, is called "Pro" here), it will not be so easy to achieve victory: the physics, which was relatively realistic in the previous part, and the artificial intelligence of the opponents have significantly "grown" , in connection with which the matches have become even a little less dynamic, but at the same time they require both attentiveness and reaction (we do not even mention the fact that it is absolutely necessary to know at least the basic rules of American football as such, because this is obvious); keep in mind that the commands given to the players, even in this aforementioned "mode" (not to mention the "traditional") will suffice.
‹
›
Home
View web version