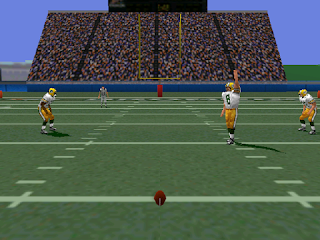 Genre: Sports
Perspective: Bird's-eye view
Visual: 2D scrolling
Sport: Football (American)
Published by: Electronic Arts
Developed by: EA Tiburon
Released: 1998
Platforms: Nintendo 64 (N64), PlayStation (PSX, PS1)
As with all yearly updates to the football series, Madden NFL 99 features improved graphics and AI over its predecessors. Force feedback, 8-button controllers and online support are available. The team roster includes nearly 100 successful vintage NFL teams as well as the full up to date roster at the time. There is more commentary integrated than before.
This version features a new Franchise mode, which allows you to control a team through a number of seasons, taking into account free agents, retirement, drafts, and salary caps. Each team can have different playbooks.
Also added is a one-button mode, which simplifies controls for beginners. Tying in with this is the arcade mode, which removes some of the more complex rules and adds to the force of impacts.
‹
›
Home
View web version