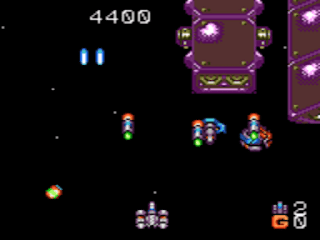 Genre: Action
Perspective: Top-down
Visual: 2D scrolling
Gameplay: Arcade, Shooter
Setting: Sci-fi / futuristic
Published by: SEGA Enterprises Ltd.
Developed by: Compile
Released: 1993
Platforms: SEGA Game Gear, MSX
An excellent representative of the flying genre, a direct sequel to GG Aleste, also known as GG Aleste II. It's definitely worth playing. Interesting backgrounds, a sea of enemies, a huge number of improvements and good music await you in this game. The goal is most likely familiar to you: to fly forward and destroy all living things along the way. Well, what else can I say? Dedicated to all fans of flying machines! Be careful: on the Sega Master System under the same name, a completely different game, although released in the same year, from the same developer and also related to the Aleste series.
‹
›
Home
View web version