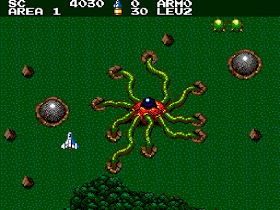 Switch "Machine Type" to MSX2, "Cart Mapper Type" to ascii16nf, reatart emulator.
Genre: Action
Perspective: Top-down
Visual: 2D scrolling
Gameplay: Arcade, Shooter
Setting: Sci-Fi / Futuristic
Published by: Compile
Developed by: Compile
Released: 1989
Platforms: MSX, SEGA Game Gear
The game is a very fast vertical shooter. The player has to fly to the end of the field and is hampered by a large arsenal of opponents. Each field has an end boss. The game can be played by up to one person.

The game takes place in the year 2039, two deccenia after the supercomputer DIA51 attacked the earth. After a long period of recovery, the Earth is again attacked by an alien breed of plant-like creatures called "Vagand". In an attempt to find a suitable dietary ground, an astronaut of the earth is destroyed, controlled by former hero Ray Waizen. Their plan to enter the earth is a challenge by the latest version of the Aleste, run by Ellinor, Ray's daughter and his wife Yuri. Ellinor swears to kill her fathers and personally put an end to Gaizel, the leader of the Vagand.

The Retro Gamer magazine chose Aleste 2 for their top 10 MSX games. Despite the fact that all three Alest MSX titles were considered worthwhile, Aleste 2 was chosen for appearance, a free weapon choice at the beginning, and the first title of the series with returning protagonist Ellinor.
‹
›
Home
View web version